Donald Trump’s Nominee for Attorney General Would Be a Disaster for Church/State Separation November 18, 2016 Hemant Mehta

Alabama Senator Jeff Sessions, tapped this morning by Donald Trump to be the next Attorney General, has made it very clear over the years that he values the Bible over the Constitution.

(He’s also racist, once saying that a white lawyer defending a black client was a “disgrace to his race.” But for now, let’s talk about how Sessions sees secularism as the enemy.)

During the Republican National Convention this summer, Sessions, who sits on the Senate Judiciary Committee, sat for a panel discussion in which he criticized Supreme Court Justice Sonia Sotomayor for her alleged irreligiosity:

I unpacked that statement in more detail months ago. Needless to say, Justice Sotomayor is Roman Catholic, and Sessions had no business claiming that non-religious people didn’t have a sense of morality that would prevent them from being arbiters of the truth. Besides the bigotry, it’s simply not true.

Referring again to Sotomayor’s statement at the Faith and Freedom Coalition’s Road to Majority conference earlier this summer, Sessions also added that it represented “a postmodern, relativistic, secular mindset and I believe it’s directly contrary to the founding of our republic.”

A secular mindset is not contrary to the founding of our republic. It’s a mindset celebrated in the First Amendment. If Sessions doesn’t understand that, what hope do advocates of church/state separation have in the years to come?

By the way, at that same conference, Reed argued that his immigration policy — one that Trump adopted — was the “biblical” one, suggesting that anything less than a draconian policy would go against the Bible. As if appeasing Jesus is the bar we need to meet now.

If Sessions is confirmed as Attorney General, one of his roles would be recommending to the President “appointments to federal judicial positions and to positions within the Department, including U.S. Attorneys and U.S. Marshals.”

It seems clear from Sessions’ comments that he has every intention of imposing a religious test on prospective judges and lawyers at all levels of the government. Even though Republicans have the majority in the Senate, and there’s little chance he won’t skate through the confirmation process, I hope some of the elected officials question how Sessions plans to impose his faith in that position. There’s plenty of evidence that non-Christians won’t get a fair hearing in this administration.

Not that Trump cares. The Constitution means nothing to him. 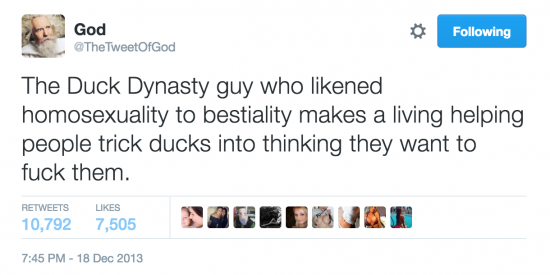 November 18, 2016
Goodbye and Good Riddance to Duck Dynasty
Next Post

November 18, 2016 After Video With Falsified Subtitles Spreads, Top Indonesian Politician Faces Blasphemy Inquiry
Browse Our Archives
What Are Your Thoughts?leave a comment