Creationist Ken Ham, whose Noah’s Ark theme park has a price tag of $102 million, went on a Twitter rant this morning to argue that we need to stop funding the study of evolution and alien life because that money “could be used to benefit the human population in so many ways.” 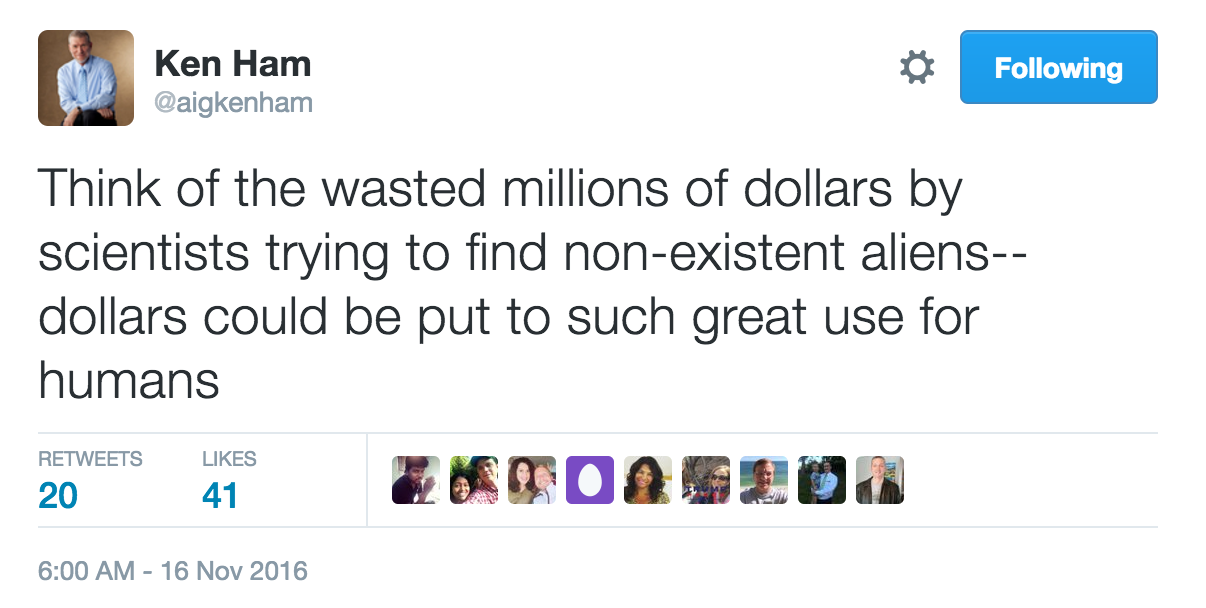 Ham has no idea how science works, does he…?

Because if he did, he would know that scientists aren’t “researching” evolution, per se, but they use the understanding of how it works to develop treatments for no shortage of diseases (just to name one implication). As one university affiliated website noted, “Learning about the evolutionary origins of diseases may provide clues about how to treat them.” That knowledge helps us stay one step ahead of harmful organisms when it comes to creating vaccines, antibiotics, and other drugs. And when those organisms evolve to resist our treatments, we can keep up in that arms race. There’s also the ability to create crops with bigger yields, food that’s more nutritious, etc.

Ham may very well agree with everything I just wrote and argue that’s “microevolution,” not one species “changing” into another. He doesn’t get that the latter is a natural consequence of the former. He also doesn’t get that scientists aren’t sitting around in labs researching whether or not evolution is true. They already know it’s true. They’re using the implications of that reality to do more research that saves lives, may help us in the future (in terms of genetics), and increases our understanding of how we came to be.

On a more philosophical level, knowing how evolution works makes us cherish life because we understand how lucky we are to be here today. A lot of things had to go right for humans to evolve as we did; there are so many more ways it could’ve gone differently.

Meanwhile, Ham’s researchers over at the Creation Museum (price tag: $27 million) have yet to explain how believing God poofed us into existence and punishes us for our sins helps us gain an upper hand on Mother Nature. It’s not true, and even if it were, so what?

Creationism is the end of a conversation. Evolution is the start of so many more.

As for the search for alien life, the main organization devoted to that — the SETI Institute — is funded by donations from people who support what they do. And if Ham wants to go after people for donating millions to places they support, then let’s talk about the tens of billions of tax-free dollars given to churches every year…

Scientific research isn’t a waste of money. And there are plenty of Christian scientists who will attest to that. Ham’s probably jealous that real scientists produce results that his own team can never hope to replicate.

November 16, 2016
New Zealand Pastor Blames Earthquakes on Homosexuals (and Other Sinners)
Next Post

November 16, 2016 British Columbia Mother Says School District Coerced Kids Into Participating in Religious Ceremony
Browse Our Archives
What Are Your Thoughts?leave a comment