A billboard that just went up in Albuquerque, New Mexico has a timely message: 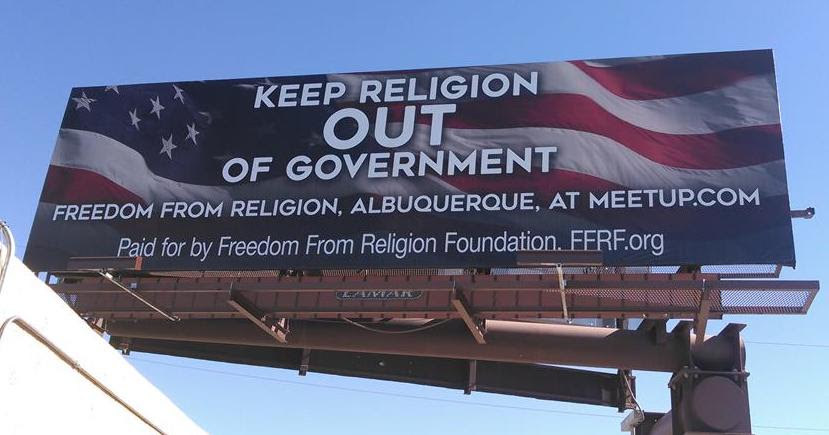 The Freedom From Religion Foundation is paying for the sign, which will be up for a month:

“This is a timely reminder to our new government that our nation was founded on the uniquely American principle that religion should stay out of the public sphere,” says FFRF Co-President Annie Laurie Gaylor. “The framers of our godless Constitution were wise to realize the wars, strife, terrorism and persecution go hand in hand when religion is allied with government. The incoming administration would do well to remember that.”

“As our country faces a challenging transition, we want to remind its citizens that it is imperative to honor the intentions of our Founders,” says Freedom From Religion-Albuquerque Vice President Kristen Gandy. “We also want to let secular individuals within our local area know that they are not alone in their values. Nontheists have a place in New Mexico to come to participate in activism, to let their godless voices be heard, and be supported in their constitutional rights with our local organization.”

Knowing Donald Trump, once he sees what state this billboard is in, he’ll vow to build a wall around the sign and get the governor to pay for it.

November 15, 2016
Once Again, Texas County Rejects Atheist Sign on Courthouse Lawn (But the Nativity Scene Can Stay)
Next Post

November 16, 2016 New Zealand Pastor Blames Earthquakes on Homosexuals (and Other Sinners)
Browse Our Archives
What Are Your Thoughts?leave a comment