God Magicked Donald Trump Into the White House, Says Pastor Who Doesn’t Get the Electoral College

Former Pennsylvania House Representative Sam Rohrer, who is currently president of the American Pastors Network, is pretty sure he knows why Donald Trump is now President.

In an appearance on “Focus Today” on Friday, Rohrer explained that Trump’s unexpected rise to the highest office in the land was the result of God “overriding the manipulations of man” and answering people’s prayers. 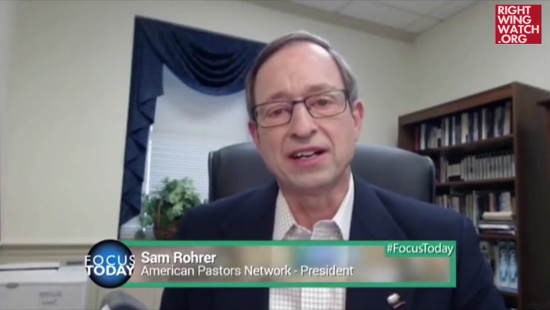 “We asked God that if you choose to have mercy on us as a nation,” Rohrer said, “and if you choose, in your providence, to overrule the manipulations of man, make a win so clear that even the opponents would have to say somebody like God or God did it. And I believe that that’s exactly what happened.”

The fact that people in the media were utterly blindsided by Trump’s victory, Rohrer declared, was proof that “what we saw was God answering the prayer of his people” and giving Christians a “window of opportunity” to save this nation.

Is anyone saying that, though? Are there any “opponents” saying that? I have heard a lot of explanations, from those of us on the left, about “Why Trump Won” — and not a single person has said, “Oh, it’s probably because God made it happen.” That includes religious people! Literally no one who opposed Trump is now saying, “Oh! I guess God just really loves dudes who go around grabbing women by the pussy. What a miracle this is!”

Allow me to point something out here: Rohrer has run for Governor of Pennsylvania and lost. He also ran for Senate… and lost. If he believes God made Donald Trump president, wouldn’t he have to simultaneously believe that God did not want him to be either a Governor or a Senator of the state of Pennsylvania? Even by his own playbook, it’s odd to trust a person God clearly did not want in higher elected office to know what God wants in a President. If he could accurately read God’s signals, he must have known those campaigns were a waste of time.