Michael Moore: Don’t Call Yourself a Christian If You Won’t Defend Victims of Trump’s Bigotry

On AM Joy over the weekend, filmmaker Michael Moore argued that white people have a special responsibility, as the people who have been in power “forever,” to defend the rights of minorities under a Donald Trump presidency.

And then he asked so-called Christians to live up to their own standards: 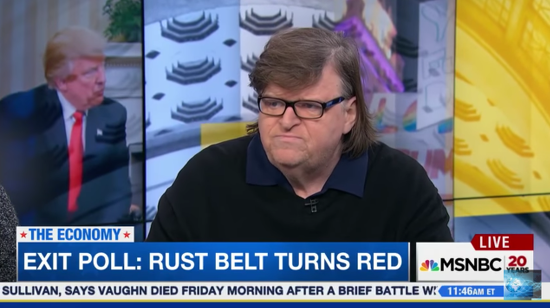 … do not call yourself a Christian if you are not willing, literally, to put your body in front of whoever is coming to hurt the other — the people who are not you.

Religious freedom means nothing if it only applies to your religion.

Unfortunately, evangelicals have already shown their true colors on this issue. Early exit polls showed that 81% of them voted for Trump. 81% of evangelicals, in other words, were either racist, sexist, ignorant bigots… or didn’t care that the man they were voting for happened to be one.

Does anyone really think they’re about to defend the civil rights of Muslims? Atheists? Anyone else?

They don’t care about anyone except themselves, and Trump exploited that fact to perfection.

Moore still believes in this notion that being “Christian” means caring for the least of these — the poor, the hungry, the ones who are oppressed. But the most vocal Christians out there, at least the ones who voted, proved this election cycle that they care about self-preservation above all else.

That’s what being Christian is all about now: crying persecution no matter what’s happening, and making sure the U.S. government promotes Christianity at the expense of all other beliefs.

And, by the way, I will follow Moore’s advice as best I can, defending those who are unfairly treated by the Trump administration. But don’t call me a Christian. You don’t have to believe in nonsense to be a decent human being.

November 14, 2016
Donald Trump: Women May Have to "Go To Another State" to Obtain Abortions Under His Supreme Court
Next Post