Donald Trump: Women May Have to “Go To Another State” to Obtain Abortions Under His Supreme Court November 14, 2016 Hemant Mehta

Donald Trump: Women May Have to “Go To Another State” to Obtain Abortions Under His Supreme Court

Of the many, many absurd bits in Donald Trump‘s first post-election interview was how he spoke about the Supreme Court with 60 Minutes‘ Lesley Stahl.

There’s obviously grave concern among liberals about the direction of the Court if a Republican president appoints multiple justices, but what was especially concerning was how Trump felt he could pick and choose which issues the Court would tackle. 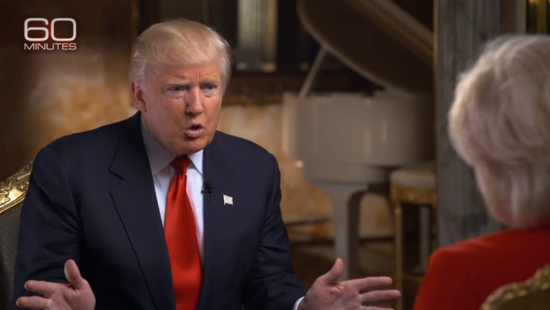 Here’s Trump on the issue of marriage equality and, by extension, LGBT rights in general:

STAHL: One of the groups that’s expressing fear are the LGBTQ group. You–

TRUMP: And yet I mentioned them at the Republican National Convention. And–

TRUMP: Everybody said, “That was so great.” I have been, you know, I’ve been-a supporter.

TRUMP: It–it’s irrelevant because it was already settled. It’s law. It was settled in the Supreme Court. I mean it’s done.

STAHL: So even if you appoint a judge that—

TRUMP: It’s done. It– you have– these cases have gone to the Supreme Court. They’ve been settled. And, I’m fine with that.

He may not care much about overturning marriage equality, and reversing the 2013 ruling is a stretch, but Trump doesn’t seem to get that a conservative Court could still hear a case threatening the rights of gay married couples. And what’s the point of marriage equality if gay and lesbian couples don’t have equal protection in their unions? Whether it’s the ability to file joint tax returns, or even the individual right of an LGBT person to pay for a product without fear of discrimination from a Christian business owner, LGBT individuals have plenty to worry about. Even if Trump doesn’t get it.

And don’t forget that his running mate Mike Pence was considered one of the most anti-gay governors in the nation. If he has any say in these Supreme Court appointments, it could be a disaster for the cause of LGBT rights.

But going back to what Trump said, the issue of marriage equality is “irrelevant because it was already settled. It’s law.” It’s amazing how quickly he accepts something that only became national law in 2015.

That would mean he accepts something the Court decided in 1973, right?

Of course not. The President who can’t keep his story straight said that he would appoint justices to overturn Roe v. Wade, letting states make decisions about abortion rights, even if that meant women would have to travel to another state to obtain one.

STAHL: During the campaign, you said that you would appoint justices who were against abortion rights. Will you appoint– are you looking to appoint a justice who wants to overturn Roe v. Wade?

TRUMP: So look, here’s what’s going to happen– I’m going to– I’m pro-life. The judges will be pro-life. They’ll be very—

STAHL: But what about overturning this law–

STAHL: Yeah, but then some women won’t be able to get an abortion?

TRUMP: No, it’ll go back to the states.

TRUMP: Yeah, well, they’ll perhaps have to go, they’ll have to go to another state.

It’s another example of Trump discussing abortion, a topic he knows virtually nothing about, and painting himself into a corner. Earlier in the year, he said women who had abortions needed to be punished in some way. Now, his “softer” stance is that many women in the country will have to drive to another state to undergo a procedure that the Supreme Court said decades ago is perfectly legal.

That would uniquely affect women who are poor and living in and around states run by Republicans. So much for precedent.

And, once again, if Mike Pence has any say, the problem will be even worse. After all, in Indiana, he passed a law — later invalidated — saying aborted fetuses had to receive a funeral or be cremated. It was also in his state where a woman who underwent a self-induced abortion was sentenced to 20 years in prison under a feticide law. (Higher courts eventually overturned that, but not before she spent over a year behind bars.)

The damage Trump will cause over his time in office is still being debated, but he’s already giving contradictory answers about some of the most important decisions he’ll ever have to make. For those of us who care deeply about social issues, his hypocrisy and ignorance leave too many awful possibilities on the table.

A conservative Court would be able to rule on LGBT rights, abortion rights, and everything else. Given the right cases, Trump’s assurance that some decisions are settled law would mean absolutely nothing.

November 14, 2016
A Helpful Venn Diagram of the "Big Three" Religions
Next Post

November 14, 2016 Michael Moore: Don't Call Yourself a Christian If You Won't Defend Victims of Trump's Bigotry
Browse Our Archives
What Are Your Thoughts?leave a comment