With Mike Pence At His Side, Donald Trump Will Be a Disaster for LGBT Americans November 13, 2016 Hemant Mehta

With Mike Pence At His Side, Donald Trump Will Be a Disaster for LGBT Americans

In case you’re wondering just how bad a Donald Trump administration will be for LGBT rights, look no further than Mike Pence, his future Vice President.

On Friday night, Rachel Maddow talked about how extreme Pence is in his bigotry. It’s not simply his opposition to marriage equality or his support of discrimination against gay people. It’s taking money away from programs helping AIDS victims so it can be used to “cure” LGBT people through conversion therapy. 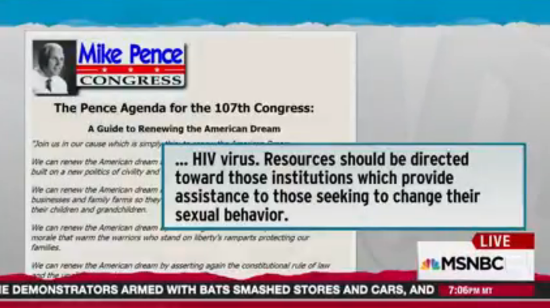 Trump has gotten away with taking both sides of the issue — saying he’ll be a friend to the gay community — but he’ll have to make decisions before long. And his running mate is someone best known for his faith-based hatred toward homosexuality. If Pence has any say, Trump’s decisions could be a disaster for LGBT people and anyone who cares for them — basically, everyone except Pence and other evangelicals like him.