How did Donald Trump win the election? Was it lack of voter turnout among Democrats? People who voted for a third party candidate? A lack of outreach to the Rust Belt states? Poor polling leading to bad planning?

Nope! The apparent answer is that the moment a Christian prayer event featuring former Congresswoman Michele Bachmann and pseudo-historian David Barton began streaming on a Christian TV station, Donald Trump’s odds of winning surpassed those of Hillary Clinton. (Thanks, Jesus!) 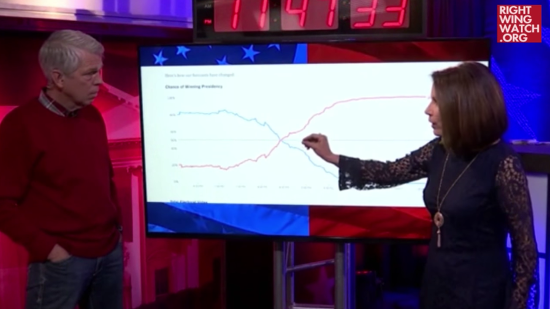 … Showing a graphic from The New York Times that originally showed Hillary Clinton with a strong chance of winning and then gradually showed Trump’s chances increasing as the night’s results rolled in, Bachmann singled out the point where the two lines crossed and noted that that was also the exact moment that their election coverage went live on Daystar.

“We have a prayer room here,” she said, “we had people all across the United States joining with our prayer room here in Dallas in prayer, and look what happened. This was the moment when the whole race broke, when prayer began, when the church came out and then we see a 30-point swing here, a 30-point swing here and now we see the swing to a 95 percent chance of winning Trump, a five percent chance of winning Clinton. It’s phenomenal!”

You won’t be surprised to learn that Bachmann doesn’t understand that graphic… or math.

While it may be true that the prayer event began airing on television at the same moment Hillary Clinton’s odds dipped below 50%, the votes were already cast. That graph merely reflects the odds as the votes were being counted and published. In other words, prayer event or no prayer event, the votes (and odds) were always going to head in that direction at that time.

Unless God committed a massive act of voter fraud, that is.

It’s also worth noting that Trump’s odds began changing 90 minutes before the prayer event aired on TV. What’s the explanation for that? Bachmann didn’t bother to say.

November 12, 2016
Creationist Ken Ham: Donald Trump Won the Election Because "God, Not the Media, is in Control"
Next Post

November 12, 2016 Gay Republican Group That Endorsed Trump Wants Money to Defend Obama's LGBT Achievements
Browse Our Archives
What Are Your Thoughts?leave a comment