The Log Cabin Republicans — a group representing gay conservatives — endorsed Donald Trump through their PAC a few weeks ago. It should strike you as odd that a group supposedly looking out for the best interests of the LGBT community would support a man who (among other things) befriended Christian pastors who want to discriminate against gay customers and selected a vice presidential candidate whose claim to fame was passing the most anti-LGBT laws in the nation while governing Indiana. 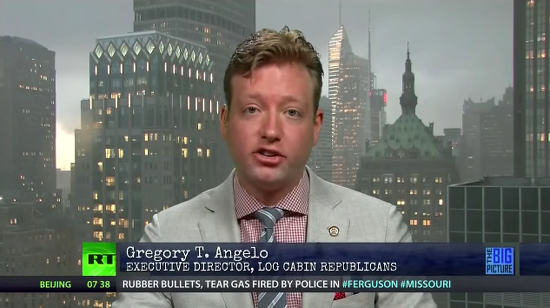 Now, following Trump’s victory, the group’s president Gregory T. Angelo has put out a jaw-dropping press release asking for donations in order to help the Log Cabin Republicans maintain all the gains Democrats achieved thanks to President Obama.

For the past three weeks, I’ve been in regular communication with the Trump Transition Team, the group tasked with organizing personnel and policy for our president-elect.

While Log Cabin Republicans was working to have a relationship with our nation’s incoming chief executive, the LGBT Left was busy demonizing Donald Trump and fundraising off of bogeymen.

That’s why your support is needed so much right now. Please give now and give generously — $250, $100, $50, or whatever you can give will make a difference when it matters most.

There’s a simple explanation for why liberal groups demonized Trump: His candidacy and presidency represents a real and dire threat to LGBT Americans. Just because Angelo is in “communication” with them doesn’t mean they’re listening to him. How delusional must he be to think the Trump administration will be the “most pro-LGBT” one in history?

The truth is that LGBT conservatives would have been better off supporting Democrats who (now) actively defend their civil rights and have the maturity to compromise and negotiate on secondary issues. Instead, they’re now stuck with an administration that already acts as if it’s authoritarian and has made promises to evangelical Christians threatening to overturn everything our side has achieved over the past eight years.

With everything Trump has said over the past 18 months, who would be stupid enough at this point to think he was just kidding and will finally start acting like an adult? Hell, with the most anti-LGBT Republican platform ever, how does this group not get that they’re being used?

But I guess this means that we can blame the Log Cabin Republicans when shit hits the fan on LGBT issues.