Creationist Ken Ham: Donald Trump Won the Election Because “God, Not the Media, is in Control” November 12, 2016 Hemant Mehta

Creationist Ken Ham: Donald Trump Won the Election Because “God, Not the Media, is in Control”

Creationist Ken Ham would like everyone to know that the reason Donald Trump won the election was because God’s in charge. 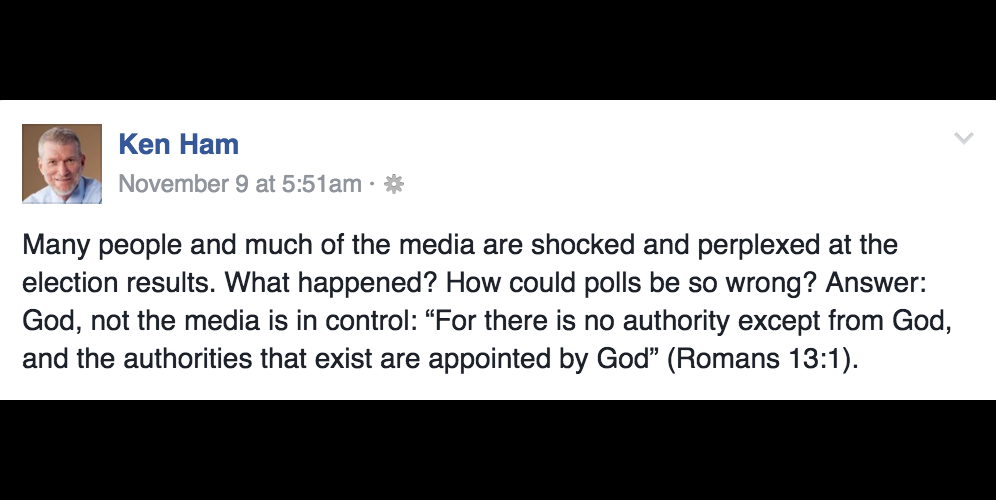 Many people and much of the media are shocked and perplexed at the election results. What happened? How could polls be so wrong? Answer: God, not the media is in control: “For there is no authority except from God, and the authorities that exist are appointed by God” (Romans 13:1).

The tin foil on Ham’s head may tell him the media controls the election, but what exactly was God thinking by carrying Trump to victory?

As I wrote before, Trump can’t name his favorite Bible verse, can’t say whether he prefers the Old or New Testament, never asks God for forgiveness, rejects religious freedom (for Muslims), thinks the biggest problem Christians face is the inability to say “Merry Christmas” in department stores, lies without effort, treats women’s bodies as his personal property and brags about sexually assaulting them, has been married three times, mocks the disabled, is condescending to black people, enjoys the support of the KKK, has given virtually no money to charity (at least when it didn’t benefit himself), and doesn’t know the first thing about being “pro-life.”

Hell, Trump didn’t even thank God in his acceptance speech. It’s worth noting that Ham wrote more than a year ago that he doubted whether Trump “truly understands what real Christianity is. He certainly does not promote the Christian worldview.” But it appears his tune has changed since then.

If this is God’s Chosen President, then evangelical Christians are doing life wrong.

And where were the conservatives celebrating God being “in control” when Barack Obama became President? Or was God merely testing their resolve then, while rewarding them now?

Just remember: Based on what evangelicals are saying, Trump’s presidency is God’s doing (and they helped). That means we can all blame them when this presidency and our country go off the rails.

November 12, 2016 Michele Bachmann: Donald Trump's Odds of Winning Improved the Moment Our Prayers Went Live on TV
Browse Our Archives
What Are Your Thoughts?leave a comment