Texas Student: My Principal Paddled Me for Not Standing During the Pledge of Allegiance November 11, 2016 Hemant Mehta

Texas Student: My Principal Paddled Me for Not Standing During the Pledge of Allegiance

Carrie Douglas, a student at Dawson Junior/Senior High School in Texas, says she was paddled for not standing up during the Pledge of Allegiance. 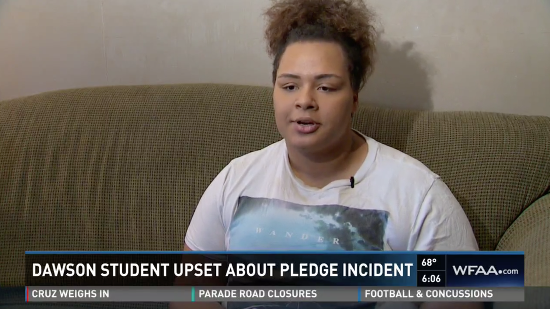 … she says a substitute teacher took offense to the fact that Carrie didn’t stand during the pledge.

“She said ‘Carrie stand up’ and I said no. She said well stand up or go to the office,” Carrie said.

She says she had to go to the principal’s office who said she was in trouble for being disrespectful and consequently was given the choice of detention or paddling.

Is that even allowed?! Apparently so. The Student Code of Conduct even says that corporal punishment is an option for punishment “unless the student’s parent or guardian has provided a signed statement prohibiting its use.”

But setting aside the paddling, Carrie did nothing wrong. Staying seated for the Pledge is her right. She knew that. The Superintendent knew that (and said as much when speaking to a reporter).

The only people who didn’t get it were the substitute teacher and the principal, neither of whom seems to be getting punished as a result of their actions.

They’re not even getting a paddling.

November 11, 2016
On Veterans Day, Remember That There Are Indeed Atheists in Foxholes
Next Post