Starbucks’ New Holiday-Themed Cups Will Include One With a Nativity Scene November 11, 2016 Hemant Mehta

After complaints from Christians who couldn’t handle a red cup last year, and those who couldn’t deal with (obviously anti-God) green cups this year, Starbucks has announced it will launch a series of ten holiday-themed cups, one of which includes a Nativity scene: 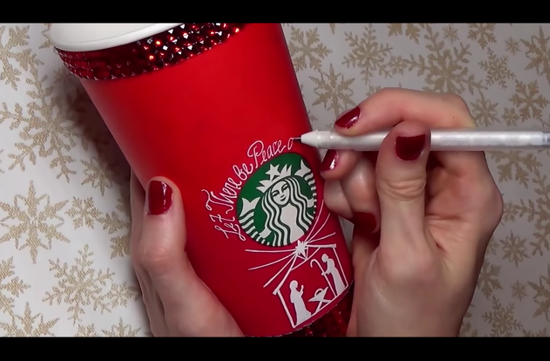 Are you happy Joshua Feuerstein? Or are the other nine cups an assault on your faith? There’s no word on his site as of this writing. He’s too busy celebrating the anointing of Jesus Trump.

But if there’s one thing conservative Christians hate more than being ignored, it’s being treated as equals with people who think differently, so expect those complaints soon.

November 10, 2016
Rep. Mike Honda, a Congressman Who Cared About Atheists, Lost His Re-Election Bid
Next Post

November 11, 2016 On Veterans Day, Remember That There Are Indeed Atheists in Foxholes
"Did you respond by hollering "Cück! AR doesn't stand for Assault Rifle!" then laugh in ..."
RegularJoe Sign Outside Christian Hate-Preacher’s Tent: “This ..."
"Ixnay on the ayerpray"
Akira625 Will the Parliament of Victoria Finally ..."
"Seriously. Tons and tons of randos over the years have asked if I've "Found The ..."
WallofSleep Nigerian Humanist Mubarak Bala Formally Charged ..."
"https://uploads.disquscdn.c..."
Akira625 Will the Parliament of Victoria Finally ..."
Browse Our Archives
What Are Your Thoughts?leave a comment