How to Effectively Channel Your Anger After Donald Trump’s Election November 11, 2016 Hemant Mehta

How to Effectively Channel Your Anger After Donald Trump’s Election

For a lot of people, including many secular activists like myself, the success of the Donald Trump/Mike Pence ticket feels like Armageddon. But there are healthy ways to channel our anger, dismay, and other complicated feelings stemming from this election. 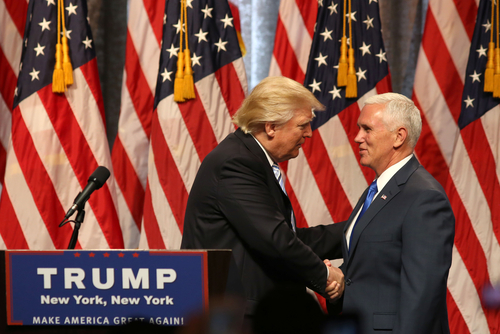 I don’t blame people for being scared. After all, the highest political offices in the United States (arguably the world) are held by a narcissistic demagogue willing to demonize any “out group” and a Christian fundamentalist who oppresses the LGBT+ community every chance he gets.

I also think self-proclaimed reasonable people should be able to respond this setback without resorting to violence, shaming his wife, damaging others’ property, or threatening assassination.

So, what should we do? Many disappointed Democrats are choosing to focus on 2020. Some are gearing up for Hillary Clinton’s potential run, while others are prepping for Michelle Obama’s rumored bid for the presidency. (Emphasis on the “rumored.” She has emphatically rejected that possibility many times.) There’s also speculation about the future leaders of the party, including Senators Cory Booker and Elizabeth Warren. Either way, these people are doing it right: they are focusing on the future and not wallowing in the past. We can’t change it. There’s no other option.

Fellow secular activists have come up with some interesting coping mechanisms, too. Sarah Levin, Senior Legislative Representative for the Secular Coalition for America, said the freethought lobby will be paying close attention to the midterm elections. She also said the group is going to keep an eye on Trump’s administration, ensuring separation of church and state is preserved.

American Atheists is also changing up its pace. David Silverman, president of the organization, said they will “redouble” their get-out-the-vote effort. And for my part, I started an organization aimed at electing reasonable candidates (from any party) and enacting legislation based on scientific evidence.

Here are some things all of you can do to deal with the fact that our country just elected someone who is arguably the most bigoted, anti-science president in history.

Most people don’t think much about politics until a few months before the presidential election, but now — when passions are highest — is the best time to get involved in politics. This doesn’t just mean waiting until another good candidate runs for office; it means participating at the local and state level. It means attending peaceful protests and perhaps even engaging in civil disobedience. It means writing your local government officials to make sure they know you want change. It means running for school boards and city councils.

With Trump as president, there is a cloud of uncertainty for just about everyone. Certain groups, however, will undoubtedly see (and have already seen) negative repercussions as a result of the election. For some, the next four years might be spent fighting for women’s and LGBT+ rights, or educating the public on the dangers of climate change (which, contrary to what Trump has said, is not a hoax by the Chinese).

It may be difficult at a time like this, but thinking positively has never been more important. If you need help, keep in mind that Hillary Clinton won the popular vote. Yes, the fundamentalists and bullies got their way, but they weren’t the majority in this election. We are still a nation of people who care about basic human decency; we just need to do a better job of getting our side out on Election Day. In a few years, when the youngest generation has grown up under this Republican presidency, you can bet that Trump’s vocal minority will be even smaller. Plus, California and six other states legalized pot! So there’s that.

Like most things, this result is better handled if its better understood. We have to learn why traditionally blue states turned red (it has been theorized that a key bloc of conservative white voters supported Trump even though they didn’t support Romney in 2012), and how to keep it from happening the next time around. Perhaps most importantly, we need to understand the hate and fear-mongering that got us here — because that’s the only way to stop it. We need to know why people are so angry… or at least we need those angry people to feel like we sincerely care about them, because they sure as hell didn’t think that this election cycle.

Whatever you decide to do in the wake of Trump’s stunning win, I hope it’s something positive. I hope we can use this as a learning opportunity. We can become better activists, better strategists, and better people.

November 11, 2016
Asra Nomani, an Immigrant and a Reformer of Islam, Explains Why She Voted For Donald Trump
Next Post