While a lot of talk show hosts have already shared their thoughts about the election results, I thought Seth Meyers made a good point, giving us reason to be optimistic. 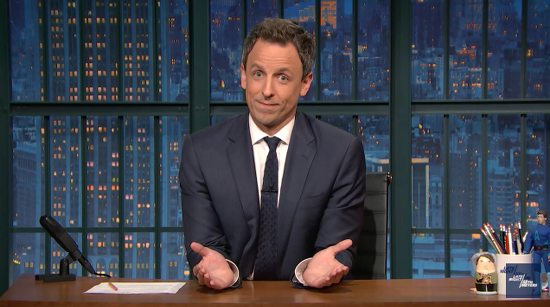 … in general, I am hopeful for President Trump because hope is always the best possible path to take, and one thing that makes me hopeful is we know from interviews he’s given over the years that he has, at any given point, held every position, on every issue.

He’s been pro-choice, pro-life, for the Iraq War, against the Iraq War. Pretty much his only consistent position has been against Rosie O’Donnell.

So I’m hopeful that he’s not actually a racist, and that he just used racist rhetoric to court voters, because when you’re courting someone, you’re always willing to be something you’re not…

Of course, Trump was known as a racist long before he began campaigning for public office… but it’s nice to think that because he has no moral compass, he could theoretically end up anywhere.

Tell me again where I send the thank you cards to the Democrats who didn’t vote?