Rep. Mike Honda, a Congressman Who Cared About Atheists, Lost His Re-Election Bid

This is one more bit of disappointing news after a disappointing election. (The good news is we’re all so stunned by Donald Trump that this will barely register.)

Rep. Mike Honda (D-CA), a long-time supporter of church/state separation, lost his re-election bid on Tuesday. He lost to a fellow Democrat, so it’s not a seat flip, but we’ve lost a champion for the secular community. He had been in that seat since 2001. 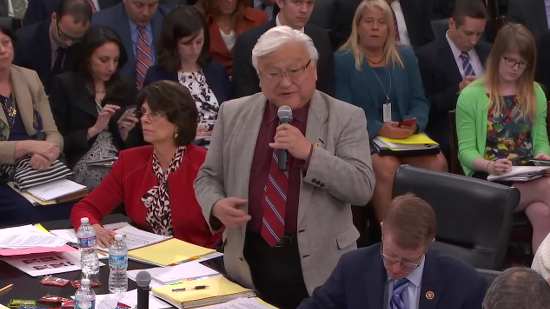 Honda not only received one of the only perfect scores on the 2014 Secular Coalition for America congressional report card, he twice introduced a resolution celebrating the “National Day of Reason” (an alternative to the National Day of Prayer).

Matthew Bulger, the American Humanist Association’s Legislative Director, worked with Honda on those resolutions and shared this lovely story about running into the Congressman at an event:

We caught up on how his family was doing, how I was doing, and how the nontheistic community in general felt about the direction of politics. The conversation wasn’t that of a lobbyist and politician, but of two human beings wanting to know more about each other. This wasn’t just a one-time conversation either, as Honda occasionally called me and other AHA staff to see how we were doing and even to express his concerns about the plight of atheists and other nontheists who were being persecuted around the world for their lack of religious beliefs.

We often complain that politicians treat us like Kryptonite, but Honda genuinely cared about our issues and took the initiative to reach out to us even when we didn’t ask for it. He’ll be missed in Congress.

November 11, 2016 Starbucks' New Holiday-Themed Cups Will Include One With a Nativity Scene
Browse Our Archives
What Are Your Thoughts?leave a comment