“Psychic” Uri Geller: See? I Told You Donald Trump Would Win Because He Has 11 Letters in His Name November 10, 2016 Hemant Mehta

“Psychic” Uri Geller: See? I Told You Donald Trump Would Win Because He Has 11 Letters in His Name

Two months ago, the self-proclaimed paranormalist Uri Geller told us that Donald Trump would win the election. And he had airtight proof: Trump has 11 letters in his name. 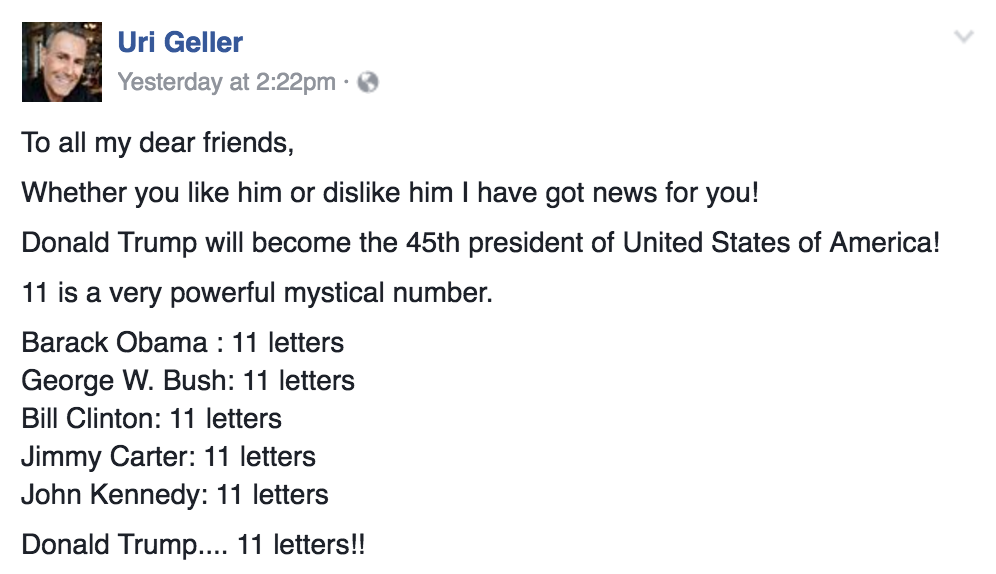 Whether you like him or dislike him I have got news for you!

Donald Trump will become the 45th president of United States of America!

11 is a very powerful mystical number.

As I said then, it was all too convenient for Geller to point to 11 letters in presidents’ names when he omitted some altogether (Bush, Reagan, Ford, Nixon, Johnson), used a nickname (“Jimmy”), included a middle initial in one place (“W.”), and ignored a middle initial in another (“John Kennedy”?)…

(Just to prove his point, he also included “Jesus Christ” on his list. As if “Christ” was his actual last name.)

But yesterday, Geller admitted that he reverse engineered the names to achieve his 11-letter goal, saying that his prediction of a Trump victory was just dumb luck.

I’m just kidding. He’s gloating about his “psychic” victory like you wouldn’t believe.

I hate to say I told you so, but…! 😉 I did say it, back on the 16th of September, that Donald Trump would become the next US President.

I know that the skeptically minded will say well there were only 2 people running, a 2 horse race, it was 50/50, lucky guess, and so on. But was it really 50/50? Who actually believed me back in mid September when I posted my prediction?

Many people were very vocal in telling me I was wrong, and he didn’t have a chance, I’ll bet these same people are the ones now shrugging the prediction off and saying “Ah it was 50 50” ;-).

I’m not saying this to show off, I just want people to realise that there is more to this world than meets the eye. It really is possible that human beings can just know something is going to happen. Have you ever just known something, or thought about someone just before they’ve phoned you or you bumped into them in the street, or had a bizarre dream which came true?

These things really do happen, and not only to me, it’s simply that most people pass them off as coincidence or wishful thinking. I don’t, because I know it’s real!

You can see he doesn’t even mention the whole 11-letter thing. He’s changing his story after the fact to say he flat-out predicted a Trump victory, apropos of nothing.

Everyone who follows politics, many Republicans included, were shocked by Trump’s victory. Those who called it ahead of time weren’t acting on supernatural inspiration. They either knew something about voters that the pollsters and punditry did not, or they got lucky.

What they didn’t do was count the number of letters in anyone’s name.