Theodore Shoebat, who once said women who have abortions deserve the death penalty by way of a firing squad is a little too excited about Donald Trump‘s victory. 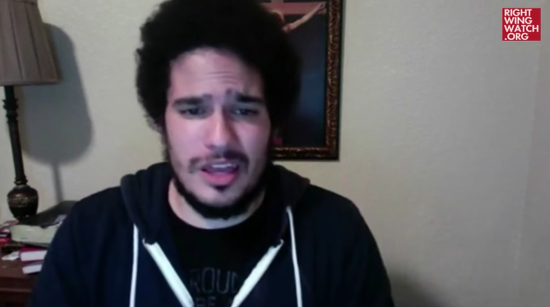 “God bless Donald Trump,” Shoebat said, “and may God guide him to do righteousness. May God use him to get rid of abortion and to get rid of this disgusting homosexual agenda, to uproot the homosexual agenda and abortion from this country, to purge this nation of this evil. May he enact laws that will put sodomites to death. May he enact laws that will put abortionists to death. Amen. Hallelujah.”

This must be what “love the sinner” looks like in Jesusland…

I kid. A bit. I’m not posting this because Shoebat represents all Christians — he doesn’t — but because he thinks his wish might come true in large part because of how evangelicals voted on Tuesday.

Trump may not call for the death penalty for LGBT people, but Mike Pence has long been a champion of the kinds of anti-gay laws that drive young LGBT people to suicide.

Trump may not outlaw abortion, but his supporters want to see it restricted or banned to the point where women have to resort to unsafe, unsanitary methods to procure one.

It’s not a firing squad, but I doubt Shoebat will complain.

By the way, Shoebat’s father (who shares many of his son’s views) appears on the same list of Anti-Muslim Extremists as reformers Ayaan Hirsi Ali and Maajid Nawaz, in case you wanted another reason why the Southern Poverty Law Center shouldn’t be taken seriously.

November 10, 2016
“Psychic” Uri Geller: See? I Told You Donald Trump Would Win Because He Has 11 Letters in His Name
Next Post