We needed you this year, Carl. 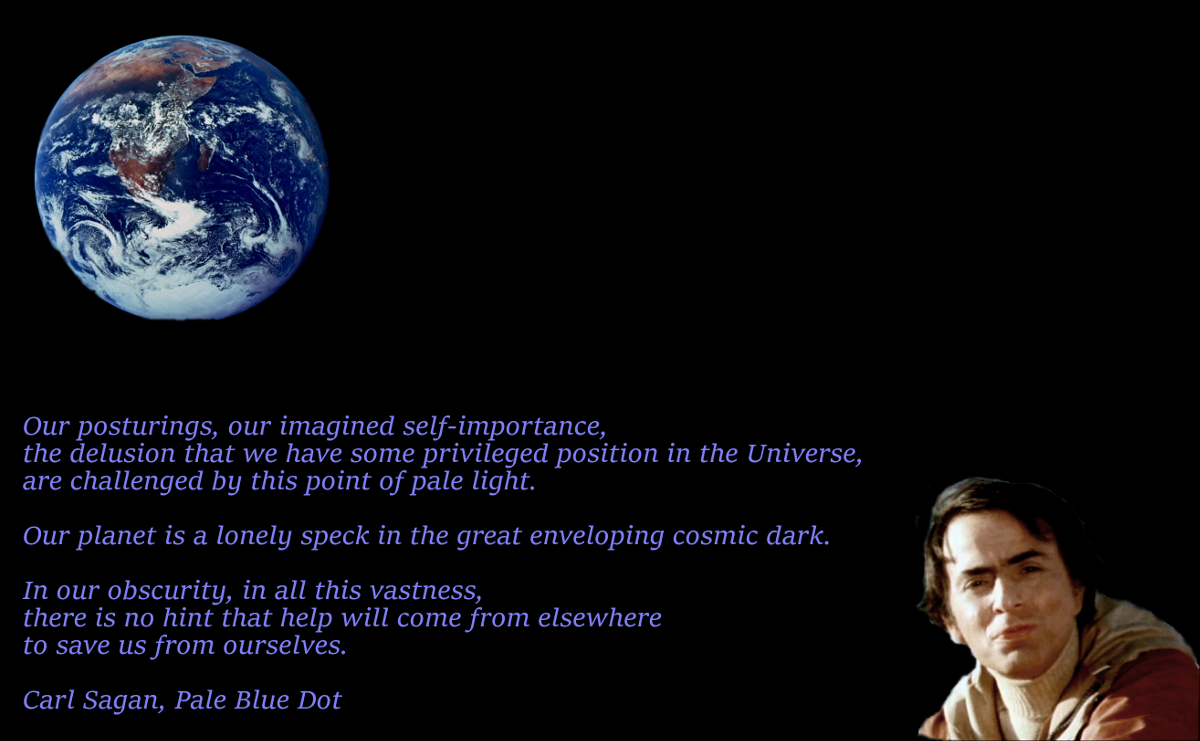 Rarely have Sagan-esque musings been more poignant than today. Pale Blue Dot was Sagan’s 1994 look at humanity from a distant vantage point. Really distant. Precisely where I wish I were just now. But no, I won’t quote THAT passage (“Look again at that dot…“); you can read it here. Those iconic words may have overshadowed many other treasures in the glorious book, which once prompted me to pull together Pale Blue Dot‘s most timely excerpts. Some of them seem apropos to Day One of America’s new nightmare.

Above all, here’s Sagan’s seemingly unheard message to America:

Uncommon strength of character is needed to resist the blandishments of those who assure us that we have an obvious, even God-given, superiority over our fellows.

We’re going to have to figure out how to grow that uncommon strength in ourselves and more Americans in the coming days.

Sagan found it useful to imagine viewing Earth from space through the eyes of space-faring alien beings, so let’s begin. Zzzappp… you’re an alien.  We’ll add to Sagan’s scenario that you’ve also been monitoring Donald Trump‘s rants. You turn to your tentacled friend and ask in bewilderment:

In another century, what will they eat? What will they breathe? How will they cope with a changing and more dangerous environment?

From your orbital perspective, you can see that something has unmistakably gone wrong. The dominant organisms, whoever they are — who have gone to so much trouble to rework the surface — are simultaneously destroying their ozone layer and their forests, eroding their topsoil, and performing massive, uncontrolled experiments on their planet’s climate. Haven’t they noticed what’s happening? Are they oblivious to their fate? Are they unable to work together on behalf of the environment that sustains them all?

Perhaps, you think, it’s time to reassess the conjecture that there’s intelligent life on Earth.

When you consider the power of this viewpoint, it’s no surprise that Republicans have been been trying to defund NASA programs that study Earth from space. I think we know where that’s headed starting today. The last thing Trump will want, once he’s this Pale Blue Dot’s most powerful man, is for Earthlings to have any more Blue Marble epiphanies.