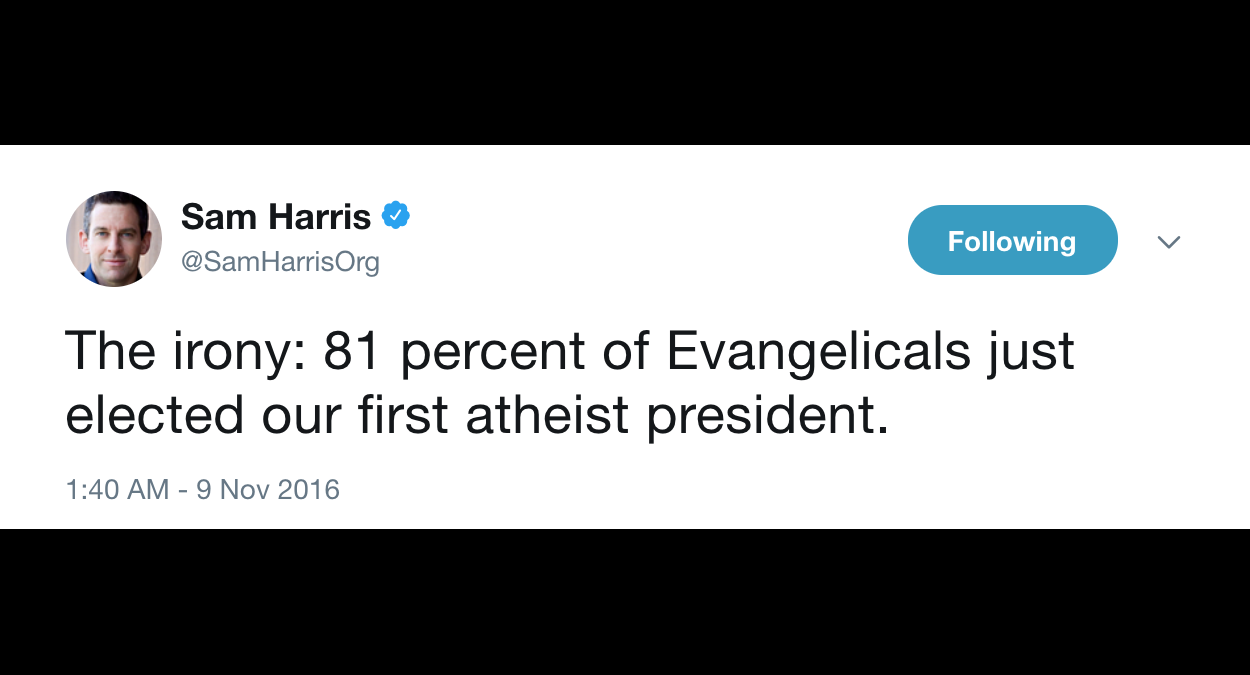 I offered my own response on Twitter, but let me elaborate a bit.

It is true that exit polling found 81% of evangelical Christians supported Donald Trump. (More on that in another post.)

But I take issue with the claim that Trump is an atheist. Not because I’m one myself and I’d hate for Trump to be lumped in with “my tribe,” but because I think atheism requires more thought than Trump gives it.

Trump isn’t someone who thinks “God doesn’t exist.” He doesn’t think about God, period. You think he spends time pondering deep philosophical questions? Of course not.

At the very least, atheism requires a bit of thought. It requires a disbelief in God’s existence. You have to understand what it is you’re rejecting. And I don’t believe for a second that Trump has ever done that.

It’s the same reason I don’t buy into the argument that infants are atheists. Just because they’ve never thought about God doesn’t mean they actively don’t believe in one.

Even if you don’t buy my argument here, that’s fine. Trump’s atheism would say no more about atheists in general than Barack Obama‘s Christianity speaks for the evangelicals who rejected him by a 4:1 margin.

Then, of course, you have evangelicals Christians claiming that he “found God” over the course of the campaign. You don’t have to believe them, but on paper, Trump is an evangelical with a group of evangelical advisors who spent the better part of the past year pandering to evangelicals.

If Donald Trump is an atheist, he’s just as bad at playing one as he is pretending to be worthy of the presidency.

He’s not a disbeliever in God. He thinks he is God.

November 9, 2016 What My Immigrant Mother Learned From Yesterday's Election
Browse Our Archives
What Are Your Thoughts?leave a comment