Convicted fraudster Jim Bakker has a warning for all of you planning on voting today: If you support Hillary Clinton, we will never ever celebrate Christmas with Jesus again.

Also, it will be the literal end of the world. 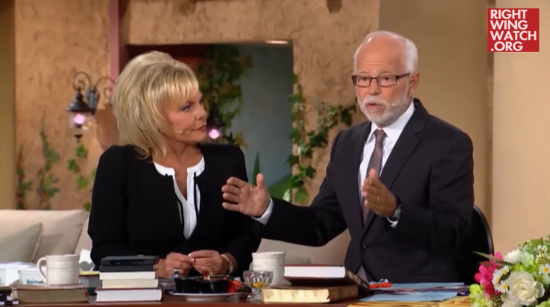 “If my candidate that I have chosen does not win, the end is nearer than you think because we’re in the final days,” he said.

Sure… and while we’re making up conspiracy theories, a President Clinton will also murder Santa Claus and steal all your presents.

Bakker is certain that the only way Clinton can win is if she cheats and steals all the votes from all those nice dead people who are up in Heaven and not even thinking about Election Day. To add to this point, Bakker’s co-host Zach Drew points out that, in 2012, Barack Obama did not win a single state that had voter ID. Because surely without voter ID laws, Georgia, Indiana, Kansas, and Tennessee would have all gone Democratic…

But if she does successfully cheat and become president, Bakker says, she will end Christmas As We Know It and begin the apocalypse.

As if eliminating the right to say “Jesus” around Christmas is somewhere on Clinton’s list of things to do in her First 100 Days. She’ll probably install some spy equipment in the houses of everyone who attends church just to make sure they’re doing a bunch of Spirit Cooking and not celebrating Jesus. Or something like that.

It only makes sense.

November 8, 2016
A Portland (OR) Elementary School Will Soon Host the First-Ever After School Satan Club Meeting
Next Post

November 8, 2016 Catholic League: President Obama Should Not Have Spoken to "Raging Anti-Catholic Bigot" Bill Maher
Browse Our Archives
What Are Your Thoughts?leave a comment