Oklahoma just voted against State Question 790, an amendment that would’ve torn down a major part of the wall of separation between church and state. This is wonderful news amidst an evening full of chaos.

Some background: In June of 2015, the Oklahoma Supreme Court ruled that a Ten Commandments monument on Capitol grounds was unconstitutional. They specifically said that the blatant promotion of Christianity violated Article 2, Section 5 of the State Constitution, the bit that says no public money can be used to support religion.

A year later, legislators were doing all they could to change the Constitution in a way that would allow the Ten Commandments monument to go back up.

The Oklahoma State Senate approved a ballot measure this past March that would remove Article 2, Section 5 from the Constitution altogether. The State House later passed the same measure on a 65-7 vote.

This measure repeals Section 5 of Article 2 of the Oklahoma Constitution. This section prohibits the use of public monies or property for sectarian or religious purposes.

SHALL THE PROPOSAL BE APPROVED?

That’s the twisted route conservative legislators are taking to give the monument a second life. If approved, it would theoretically mean taxpayer money could be used to fund religion.

Now, to be clear, even if voters said yes, the ACLU could file another lawsuit if a new monument went back up. The Ten Commandments display wouldn’t violate the Oklahoma constitution at that point, but a stand-alone monument would still undoubtedly violate the U.S. Constitution. (The U.S. Supreme Court has already ruled on this issue before.)

A “Yes” decision also wouldn’t stop groups like the Satanic Temple from requesting their own monuments be placed in the same general location.

But for the time being, conservatives Christians just wanted the measure to pass with a majority “Yes” vote.

In recent weeks, advocates of the repeal went to absurd lengths to promote it. They didn’t say this was about the Ten Commandments at all. Instead, they used lies and fear to guilt people into voting “Yes.” 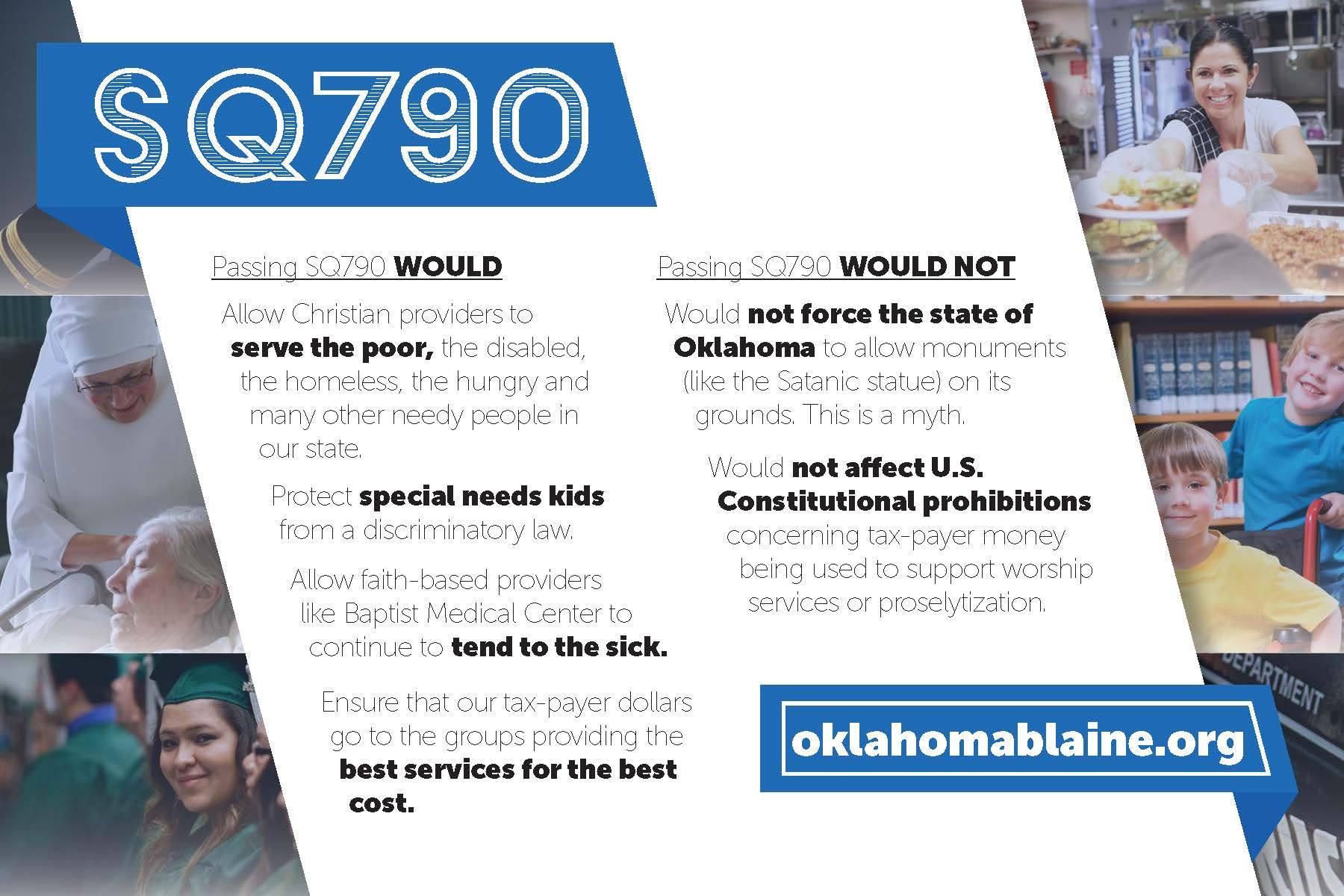 And they said very explicitly that the new law would not force the state to accept non-Christian monuments outside the Capitol building.

Kelly Percival, a legal fellow with Americans United for Separation of Church and State, said the conservative legal group Becket Fund had been “posting wildly misleading information and ads about the impacts of SQ790.” As an example, she pointed to the claim that passing SQ790 would “protect children with disabilities,” because in one case, a child bullied for his disability at a public school was given a voucher to attend a private Christian school. Without passing SQ790, the ad states, that sort of voucher would go away.

Second, last February, the courts upheld the very voucher program discussed in the Becket Fund ad, finding it to be compatible with Oklahoma’s no-aid clause. In Oliver v. Hofmeister, opponents of the voucher program argued that using state funding to send students with disabilities to religious schools violated the no-aid clause. The Supreme Court of Oklahoma disagreed and held that this voucher program was constitutional. It reasoned (incorrectly, AU would say) that the program doesn’t just fund religious schools, it also provides some benefit to the state because the students would otherwise require special-education services from the public schools.

Oklahoma’s no-aid clause does not put this voucher program at risk, and SQ790 does nothing to protect it. It is patently false for the Becket Fund to claim otherwise.

What about Christians serving the poor using state funds? They’re already allowed to do that, too, as long as they’re not proselytizing along the way. Keeping the state’s Constitution as it is wouldn’t change that one bit.

You get the idea. Conservative Christians, as usual, had to lie in order to pretend that church/state separation was really an attack against them. It wasn’t. What these Christians wanted was the ability to discriminate against people who don’t think like them and the government to promote their faith at the expenses of everyone else’s.

But tonight, Oklahomans rejected the Religious Right’s attempt to remove a pillar of church/state separation from the state’s Constitution.

(Thanks to William for the link. Large parts of this article were published earlier)

November 8, 2016
Will Hillary Use Her "Jezebel Spirit" Powers to Steal the Election?
Next Post