While the latest polls are showing Hillary Clinton with a clear lead in the election, birther site World Net Daily offers a ray of hope for Donald Trump supporters. “Forget the polls,” the site implores its readers, because apparently a secret Bible code predicted a Trump win centuries ago.

Also, because Trump is a messiah. Because why not? 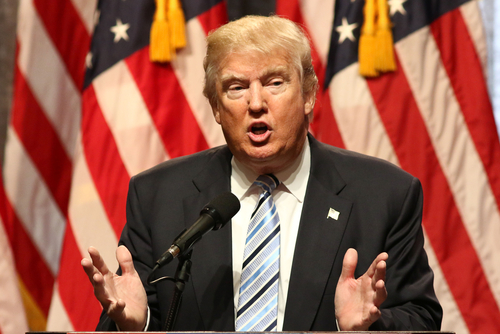 Forget what the polls and the pundits are saying.

The answer to who will win Tuesday’s presidential election is in the Bible, says an Israeli rabbi. Hillary may as well give her concession speech now.

Rabbi Matityahu Glazerson, an international Bible codes expert who has written 30 books, says it’s a fait accompli for Donald Trump. He will beat Hillary Clinton on Nov. 8 and go on to become the next president of the United States.

Glazerson sees Trump as a leader in the mold of Cyrus the Great of Persia, who helped free the Jewish people from Babylonian captivity in Old Testament times. They were then able to rebuild the Temple in Jerusalem.

Any international leader who helps the Jewish people is a type of “moshioch” or a messiah figure, he says in a three-minute video posted in late October to YouTube. Not the Messiah but a messiah.

The whole “Trump is like Cyrus the Great!” thing has been going around for a while as a way for evangelical Christians to rationalize voting for a human dumpster fire. Cyrus the Great was a pagan who was supposedly used by God to help the Jews rebuild their temple and return to their homeland. So, basically, what they’re saying is that, even though Donald Trump is a terrible person, God will “use him” to, uh, do stuff.

This is the second video Rabbi Glazerman has published claiming that the Bible is predicting a Trump win. But what does he think these “bible codes” are actually saying?

The first video was published on July 6 in which Glazerson presented a Bible-code table from Deuteronomy. He pointed to the word Donald, spelled in Hebrew letters, next to the word nasi, which is Hebrew for president. He also found an abbreviation for Artzot haBrit, which is the way the United States is referred to in Hebrew.

The date is also found in this table. Glazerson highlights the codes for 8 Cheshvan 5777, the date on the Hebrew calendar that corresponds to Nov. 9, 2016 — the first day Trump would be president-elect of the United States.

That is some seriously concrete evidence there. Although who knows? Perhaps the Bible could have been talking about Donald Duck? Or Donald Glover? Or Don Henley? Or Don Cheadle? Maybe one of those Donalds is supposed to be our president. Maybe Don Knotts was supposed to be our leader and everything is ruined now because he’s dead? Oh, wait! Don Rickles. Don Rickles is definitely supposed to be President of the United States.

Also, highlighting the Hebrew word “nasi” is probably not the best advertisement for Trump…

Let’s hope people don’t take this too seriously, we don’t need another Great Disappointment on our hands when Trump loses.

November 8, 2016
Texas Pastor Can't Decide Which Candidate is Better Because Neither is "Christian" Enough
Next Post

November 8, 2016 A Portland (OR) Elementary School Will Soon Host the First-Ever After School Satan Club Meeting
Browse Our Archives
What Are Your Thoughts?leave a comment