On Sunday, as if to underscore just how radical and extreme conservatives have become this election cycle, Priests for Life National Director Father Frank Pavone went on Facebook Live with an actual dead fetus to implore viewers to vote for Donald Trump. 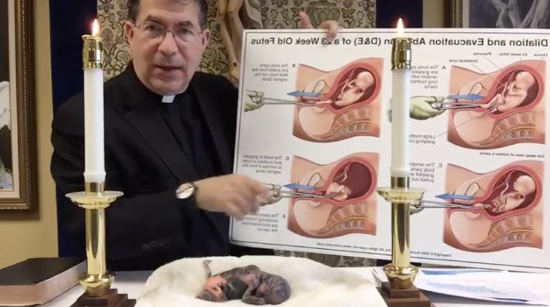 Today I am showing you a child who was killed by abortion and entrusted to us by a pathologist for burial. We have had a funeral for this baby, who rests in a Memorial Chapel — but today I am showing him to you because in this election we have to decide if we will allow this child killing to continue in America or not. Hillary Clinton and the Democratic platform says yes, let the child-killing continue (and you pay for it); Donald Trump and the Republican platform says no, the child should be protected.

Besides the fact that a President Clinton will not put a fetus on the dinner tables of all Americans — sorry, atheists — it’s just a false dichotomy. If Trump becomes president and abortion is ever outlawed, it will not prevent abortions from occurring.

All it’ll do is make abortions less safe for women to obtain. It’ll push the procedure underground, forcing women to resort to drastic measures in the case of an unwanted pregnancy.

The question isn’t whether you want to “allow this child killing.” It’s about whether you think women should have control over their own bodies and whether the government has the right to force women to give birth against their will. Republicans, by and large, don’t trust women to make those decisions.

Other Catholics aren’t thrilled with Pavone’s methods, either. Writing on Patheos, Catholic Mary Pezzulo suggests this would never be acceptable in alternative situations:

What if a priest tried to preach against rape, by parading a naked rape survivor into the church, still bleeding from her injury, and having her sit on the altar for a photo?

What if a priest wanted to preach against the death penalty, so they took the naked and still-dirty corpse of a hanging victim, the face all black and bloated, stuck it on the altar with the limbs all helter skelter and the rictus of a face staring at the congregation, stood behind him and took a selfie?

It is wrong to use dead people as political props.

Try telling that to Pavone, who doesn’t give a damn about that fetus outside of using it to advance his agenda. He justified his decision to one critic by saying “we are in the middle of a holocaust.”

Even the Archdiocese of New York condemned the video:

A human being has been sacrificed and the altar of God has been desecrated, all for politics. Everyone who respects the dignity of every human person should reject and disavow this atrocity.

The Washington Post‘s reporting suggests that this sort of in-your-face attempt to shock people against abortion is quickly fading away:

… Pavone’s actions are a signal that the older antiabortion groups are on their way out, said Charles Camosy, a bioethics professor at Fordham University and a board member of Democrats for Life. The use of graphic images has been a divisive issue in the antiabortion movement, and Camosy said Monday that nearly everyone he knows, including conservatives, have condemned Pavone’s video.

“This plays into the narrative so many people have of us, that this is a bunch of wild extremists who will put an aborted fetus on Facebook Live. Come on!” Camosy said. “This is the death rattle for the culture war-focused pro-life movement.”

That’s the crux of this issue, isn’t it? People like Pavone are pro-life, but they rarely talk about the life of the women, or how to care for the babies they want to “save.” Pavone is a Catholic priest — which means he condemns contraception, too, even though that could prevent a lot of unwanted pregnancies.

But using a dead fetus to scare people into voting for Trump? Sure, why not. The Catholic Church is all about the sanctity of life, not respect for the dead.

Nice work, Jesus. This is what your followers look like.

No wonder the Catholic Church is becoming less relevant by the day.

November 8, 2016
A Swedish Ex-Mormon Just Published a Comic Book About Leaving the LDS Church
Next Post