Last week, after an earthquake hit Italy leaving hundreds dead and many more homeless, Father Giovanni Cavalcoli went on conservative Catholic station Radio Maria with an explanation for why it happened: The Gays. 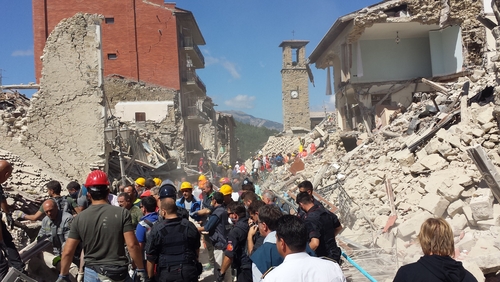 Cavalcoli told Radio Maria that the seismic shocks were “divine punishment” for “the offence to the family and the dignity of marriage, in particular through civil unions”.

In his mind, the love of straight people can move a mountain. But the love of gay people moves tectonic plates.

Here’s the good news. Everyone from Radio Maria to the Vatican quickly condemned his comments:

The radio station distanced itself from Cavalcoli’s views and the Vatican has issued a stinging rebuke, saying the idea of a vengeful God was “a pagan vision” dating from “the pre-Christian era”.

Archbishop Angelo Becciu, number two in the Vatican’s powerful secretariat of state, said Cavalcoli’s comments were “offensive to believers and disgraceful for non-believers”.

The BBC also reported on the rebukes:

“They are offensive statements for believers and scandalous for those who do not believe”, said Monsignor Angelo Becciu, deputy secretary of state, who is close to Pope Francis.

Monsignor Becciu said Radio Maria, which has come under criticism in the past for comments seen as anti-Semitic, had to “moderate the tone of its language” and conform to the Church’s message of mercy.

It’s refreshing to hear Catholic Church leaders speak out against one of their own. Maybe they’re finally learning from all those mishandled sex abuse cases… but this is still a Church that thinks sinners are going to Hell, so the enlightenment only goes so far.

The fact is your sexual orientation doesn’t affect the weather, just as your actions on Earth don’t have anything to do with what happens after you die. I’m glad the Church condemned a priest for saying there was a connection between civil unions and earthquakes, but that belief is no less rational than the one saying a consecrated communion wafer turns into the literal body of Jesus.

And, of course, the Church still condemns homosexuality, civil unions, and marriage equality. But I guess they draw a line at saying gay unions cause earthquakes because that one’s too big of a stretch.

November 7, 2016
Christian Right Activist: Donald Trump's "Grab Her By the Pussy" Tape Was Just Part of God's Plan
Next Post