What? Another post about Joshua Feuerstein?! Sure, why not.

The Christian evangelist is joining the chorus of conservatives infuriated by the fact that Jay Z and Beyoncé are campaigning for Hillary Clinton — I mean, just listen to the “bad words” in their music! (Republicans: We’ll deport Mexicans and ban Muslims, but say a word that makes us uncomfortable and we’ll freak out.)

But here’s where Feuerstein’s ignorance comes into play. Look at the screenshot he used to denounce Jay Z: 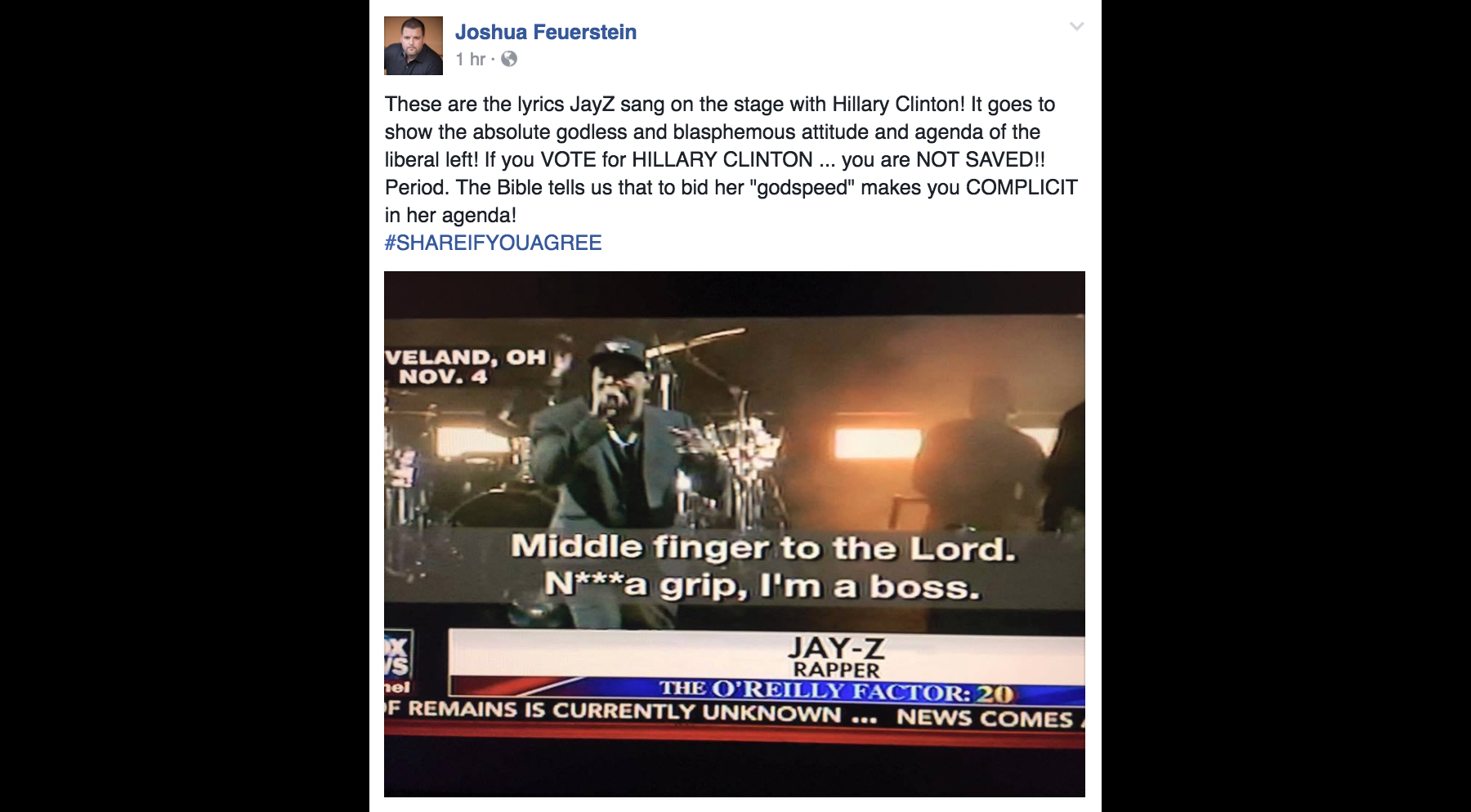 These are the lyrics JayZ sang on the stage with Hillary Clinton! It goes to show the absolute godless and blasphemous attitude and agenda of the liberal left! If you VOTE for HILLARY CLINTON … you are NOT SAVED!! Period. The Bible tells us that to bid her “godspeed” makes you COMPLICIT in her agenda!

Here’s a shocker: Feuerstein knows so little about Jay Z’s music that he didn’t realize the closed captioning was wrong. Those are not the lyrics.

In his song “Dirt Off Your Shoulder,” Jay Z isn’t talking about raising a middle finger to the Lord. He’s talking about a symbolic reaction to the law. He’s rapping about doing what he had to do — things the police might have arrested him for — when he wasn’t rich.

I probably owe it to y’all, probably be locked by the force
Tryin to hustle some things that go with the Porsche
Feeling no remorse, feeling like my hand was forced
Middle finger to the law, nigga, gripping my balls

You can go to Genius to see what all that means, but the point is that it wasn’t blasphemy. It’s a song about not letting the haters get to you. (For what it’s worth, Jay Z believes in God, though he doesn’t belong to any particular denomination.)

In his earlier video, Feuerstein complained to his followers about critics who called him racist. “How in the world am I racist?” he asked.

This is how you’re racist, Josh. You see a black guy rapping, assume the worst, do no research, and suggest to millions of people that he’s setting a horrible example.

November 7, 2016
Joshua Feuerstein: Hillary Clinton is Satan and Her Supporters Would've Voted for Hitler
Next Post