New Report: Americans Are No Longer Donating to Churches the Way They Used To November 5, 2016 Hemant Mehta

New Report: Americans Are No Longer Donating to Churches the Way They Used To

The bad news? People gave approximately $114.9 billion in donations to their churches, temples, etc. in 2014, according to a new report from the Giving USA Foundation. That’s a lot of tax-free money for those religious institutions.

The good news? That’s significantly lower, as a percentage, than what people were giving to those same institutions a few decades ago. 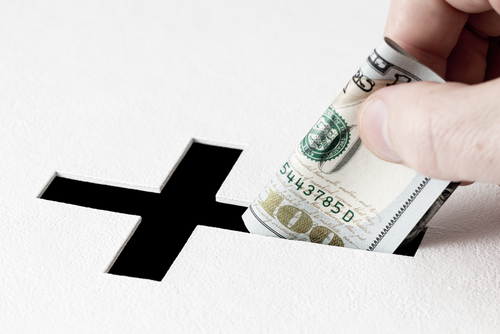 “While the overall growth is indicative of robust philanthropy to a wide spectrum of nonprofits and, thus, of all boats rising with the tide, we would be remiss to gloss over what is happening with giving to religion. Although 2014 donations reached a new high of $114.90 billion, and, as always, accounted for the largest percentage of donations, the fact is, this category is continuing its 30-year dramatic downward slide as a share of total giving. In fact, it has dropped from 53 percent of all donations in 1987 to 32 percent of the total in 2014.”

So people are donating more money to charity than ever before, but religion’s slice of the pie is getting much smaller.

The New York Times‘ Alina Tugend reports that the rise of non-religious Americans is likely playing a role in the decline:

Part of the reason is an overall decline in the number of people who identify with a religious group. According to the Pew Research Center 2014 Religious Landscape Study, 23 percent of Americans say they are not affiliated with any religion, up from 16 percent in 2007.

Another reason is that churches are, in the minds of donors, no longer the moral institutions they once were.

“In the past, there was a general sense that the church was a trustworthy institution,” [National Council of Churches spokesperson Rev. Steven D. Martin] said. Even if there were conflicts, such as during the fight for civil rights in the 1960s, “there was still an underlying sense that ‘This is my church, and this benefits the community, even if I disagree with its stand on civil rights.’”

Now, there might be less willingness to contribute if a member is ideologically opposed to a stance taken by a denomination. For example, Mr. Martin pointed out that his church, United Methodist, is debating the ordination of gays and lesbians.

It certainly makes sense. When you screw up the easiest moral questions of our time, why should I give you money? I’d much rather donate to groups that support LGBT rights and women’s rights than one functioning as an arm of the GOP.

Sociologist Ryan T. Cragun, whose work we’ve featured on this site before, agreed with that analysis, saying that in the case of some Mormons, at least, it made more sense to give money to organizations doing good work. That is: Not the Mormon Church.

Ryan T. Cragun, an associate professor of sociology at the University of Tampa, said some Mormons were choosing to use their yearly donation to pressure the church to make changes, such as ordaining women as bishops.

“They will give to a food bank or other charity — they’re using tithing as a financial tool,” said Dr. Cragun, who specializes in religion.

To be sure, a drop in donations for religious institutions doesn’t mean they’ve starving. They still rake in billions of dollars in tax-free donations every year. But this is a positive trend. People are giving more money to charity than ever before, but they’re giving it to organizations who are using that money wisely instead of religious groups that all-too-frequently only claim to be doing good with it.

November 5, 2016
In Final Rant Before Election, Bill Maher Celebrates the Trump-Fueled Fall of the Religious Right
Next Post