When it comes to speaking at religious events, the rules for elected officials are pretty damn simple: Don’t do it while acting as a representative of the government. That means Bob the Christian can tell you how awesome Jesus is, but Bob the Mayor has to remain secular while on duty.

Those lines were crossed numerous times over the summer in Mission Viejo, California.

Both Assistant Sheriff Don Barnes and City Councilwoman Wendy Bucknum (who was also Mayor Pro Tem) appeared in their official capacities during a National Day of Prayer event. Bucknum even bragged about how the event was taking place “on city property.” 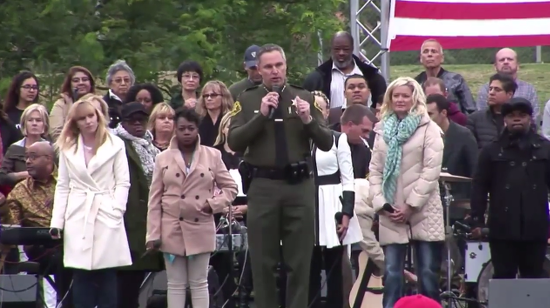 It was an egregious violation of church/state separation. And the Freedom From Religion Foundation said it had to stop. In a letter to Sheriff Sandra Hutchens, they wrote this at the time:

As sheriff, you represent a diverse population that consists of not only Christians, but also atheists and agnostics who do not believe in prayer. Your officer’s active participation in the Mission Viejo All City Prayer Meeting in his official capacity while in uniform unabashedly promoted a religious event, sending an official message of endorsement of religion over non-religion and of exclusion to the one in five Americans and one in three Americans under 30 who are not religious. It alienates non-Christians and nonbelievers in Orange County by turning them into political outsiders in their own community.

They sent a similar message to Bucknum:

Government officials can worship, pray, and participate in religious events in their personal capacities. But they are not permitted to provide credibility or prestige to their religion by lending a government office and government title to religious events. Their office and title belong to “We the people,” not the office’s temporary occupant. As mayor pro tem, you have taken an oath of office to uphold the secular U.S. Constitution, and must scrupulously avoid using your public office to promote or advance your personal religious beliefs.

The question was whether they would take any action steps to prevent this violation from happening again (that is, if they even understood that this was a violation).

We finally have an answer from Sheriff Hutchens and it’s good news. Not only do they acknowledge the mistake, they’re going to see to it that it never happens again. Hutchens said to FFRF:

… In the case of your complaint, the Department was able to determine that our employee failed to meet our expectations in significant ways and a violation was sustained. A sustained finding means that the investigation disclosed sufficient evidence to establish that an act or omission occurred that violated Department policy or otherwise fell below Department standards. The Department was taken corrective action with this employee…

She didn’t give further details, citing privacy and confidentiality, but it looks like a victory through and through. I just hope this incident sends a message to other city officials that we’re watching what they do in public, and breaking the law by promoting religion while on the clock will not be tolerated.

November 5, 2016
This is the Least Inspiring Pro-Trump Song You'll Hear This Election Season
Next Post