In Final Rant Before Election, Bill Maher Celebrates the Trump-Fueled Fall of the Religious Right

At the end of Real Time last night, after spending much of the episode warning viewers against the very real possibility of a Donald Trump presidency, Bill Maher spent a few minutes discussing the one silver lining about Trump’s candidacy: He finally exposed the rank hypocrisy of the Religious Right. 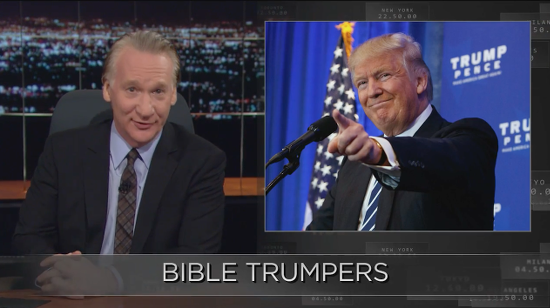 New Rule: Before leaving this election behind, we must all thank Donald Trump for the one good thing he did: He exposed evangelicals, who are big Trump supporters, as the shameless hypocrites they’ve always been.

I don’t know if you noticed, but Republicans didn’t get to play the Jesus card this time around, because it’s hard to bring up the Ten Commandments when your candidate spends his life breaking all of them.

He is the world’s least godly man.

Jesus saw the good in whores and lepers, but if he met Donald Trump, he’d go, “Sorry, man. That’s a pre-existing condition.”

So with four days left in this longest election ever, I’m gonna stop for a minute and appreciate this one silver lining: That, for once, religion wasn’t dragged into the debate. After so many elections where the candidates tried to out-Jesus each other, this one had no talk from either candidate about how they start their morning with Scripture. The Republican wasn’t reaching out to his “prayer warriors.” The debate moderators weren’t asking, “How does faith inform your decisions?” And, best of all, we were spared the sight of having to watch Hillary Clinton try and clap on the beat with a black church choir.

But I still think we are owed an explanation from the “values voters” as to how they could line up behind Trump, a man who loves to say, “Nobody loves the Bible more than I do!”… but when asked, couldn’t name a single passage.

Even Sarah Palin said, “Oh, for fuck’s sake, it’s not a newspaper!”

He also once accepted Jesus Christ as his personal Lord & Taylor.

Trump has nothing in common with Jesus, who was from the Middle East. Trump wouldn’t even let Him in the country!

Jesus turned the other cheek! Trump grabs your pussy.

The Bible says, “Thou shalt not covet thy neighbor’s wife.” Trump says, “Fine, what about my daughter?”…

He’s the Devil! What part of “Pleased to meet you, hope you guess my name” don’t you understand?

Ben Carson, who doesn’t just walk with Jesus, they shower together. [Cut to this picture]

But they went for the foul-mouthed, thrice-married pussy grabber.

With one exception and I never thought I would hear myself say this, but let’s hear it for the Mormons. The Mormons! Who bailed on Trump “bigly.”

White evangelicals go for Trump over Hillary 75% to 14%. But only 19% of Utah Mormons have a favorable view of Orange Hitler. Because, apparently, the Mormons believe you shouldn’t vote for a lying, infantile scumbag just because he’s on your team. And they’re Mormons. They’ll believe almost anything!

They believe underwear has magic powers! And you get your own planet when you die! And Adam and Eve were born in Missouri! And Jesus hung with the Indians, who were Jewish!

But ask one if Trump would make a good president, and they’re like, “Do I look like I was born yesterday?”

Quick correction: Trump actually does have a team of “prayer warriors,” if not by that exact name. They were likely brought together so Trump could pander to their groups, but let’s not pretend they don’t exist.

Beyond that, though, Maher’s absolutely right. If and when Trump loses, let’s hope he takes the Religious Right down with him. They’ve finally shown the world they don’t give a damn about ethics or morality. They’re flexible on those issues. As long as a Republican President promises to appoint anti-abortion Supreme Court justices, they’ll get behind a candidate who’s a misogynistic, racist, megalomaniacal bully.

Which shouldn’t be a surprise. Trump sounds just like the God they worship.