A lot of public universities are struggling with their budgets, raising tuition on students and increasingly relying on adjunct professors. So when you hear about any misuse of university funding, it’s natural to get angry.

This, however, will infuriate you.

Dr. Christopher Dyer, who heads up the University of New Mexico’s Gallup campus, spent more than $7,000 of taxpayer money to discuss and discover Bigfoot, according to a report from Albuquerque’s KRQE News 13. 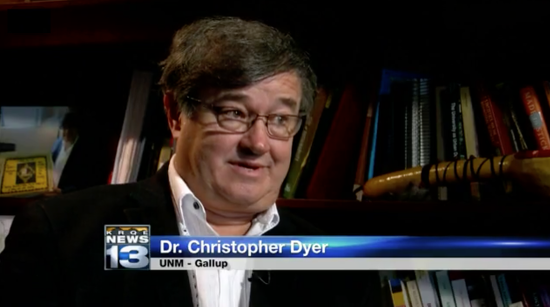 Dyer genuinely believes Bigfoot exists — he (thinks he) has a collection of Bigfoot’s hairs — and convened a two-day conference on the mythological ape this past February. That event was followed by a real-life expedition to find the ape. (They were unsuccessful.)

“I haven’t seen it but I’ve heard it. I’ve had a rock thrown at me by one at night I think. And it certainly smelled. That’s because they have a very strong odor,” says Dr. Dyer.

UNM shelled out thousands of dollars for advertising, meals for the guest speakers, airfare, hotels and per diem.…

Following the two-day conference, Dr. Dyer loaded up his van and hit the road in search of the elusive beast. It may be the first publicly funded Bigfoot expedition in history. Armed with binoculars and other paraphernalia, Dr. Dyer and some of his pals headed to the Sandia’s in search of Bigfoot.

Even though there were no students or faculty on the expedition, UNM paid for everything. There were hotels in Santa Fe and Albuquerque, meals, and mileage. Taxpayers also paid $140 for seven pairs of snowshoes for the field trip participants.

To be clear, this was not a conference on urban legends. It’s not like Dyer invited Bigfoot debunkers to speak. This was an event all about how real Bigfoot is, featuring self-proclaimed “experts” on the matter.

I’m not criticizing it just because I’m on the other side of the issue. College groups frequently receive funding to bring controversial speakers on campus. I have no problem with that. But, in those cases, at least there’s financial accountability. At least group leaders are the ones asking for the funding. At least you could say there’s value in amplifying a different sort of opinion (no matter how unpopular it is) because it gets a conversation started among students.

But Bigfoot? What’s the educational value in “studying” bullshit as if it’s real? And why is the university’s president using taxpayer money to fund his foolish hobby?

KRQE News 13 asked State Senator George Munoz, who lives in Gallup, if he had spoken to Dr. Dyer about his passion for Bigfoot.

Senator Munoz, who serves on the State Legislative Finance Committee, has a message for Dr. Dyer.

“Pay back the money,” Munoz said.

As of now, Dyer isn’t getting punished in any way. University of New Mexico President Dr. Robert Frank simply said an event like this would not be permitted again.

I’ll be the first to admit that $7,000 isn’t a lot of money for a college in the grand scheme of things and there are plenty of other ways administrators waste money. But this isn’t just about the cost; it’s about Dyer’s priorities.

What does it say about the kind of education you get on UMN-Gallup’s campus when the school is run by someone who doesn’t have the intelligence to discern actual evidence (of which none exists for Bigfoot) from the anecdotes and pretend-proof he claims to have?

That’s like giving the keys to your public university to a Creationist.

What will UMN-Gallup fund next? A conference on the Tooth Fairy? A study abroad trip to find the Loch Ness Monster? An MRI scan of Dyer’s brain?

Don’t bother. Use the money on things that actually exist.