The Religious Hypocrites Supporting Donald Trump, In Their Own Words November 4, 2016 Hemant Mehta

The Religious Hypocrites Supporting Donald Trump, In Their Own Words

It’s amazing how many religious conservatives have just thrown their self-proclaimed ethics and morals and principles out the window in their efforts to get Donald Trump elected.

Here’s just a sampling of faith leaders defending the bully, bigot, and pussy-grabber who claims to be a Christian without ever asking God for forgiveness: 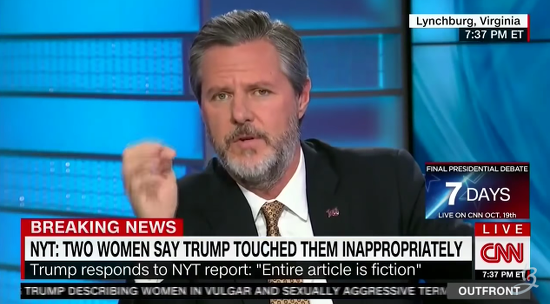 The line at the end says it all: “Conservative Christians support Trump not because the businessman’s a Christian, but because Christianity’s a business.”

November 4, 2016
A Night with Richard Dawkins and Sam Harris in Los Angeles
Next Post

November 4, 2016 Days Before Election, President Obama Discusses Atheism in Interview with Bill Maher
Browse Our Archives
What Are Your Thoughts?leave a comment