San Diego Catholic Church Sends Out Partisan Flier: “It Is a Mortal Sin to Vote Democrat”

The Immaculate Conception Catholic Church in San Diego, a church that will serve as a polling site on Tuesday, sent out a newsletter a couple of weeks ago that included a mailer telling Church members that voting for a Democrat was a “mortal sin,” implying that they should vote instead for Donald Trump. 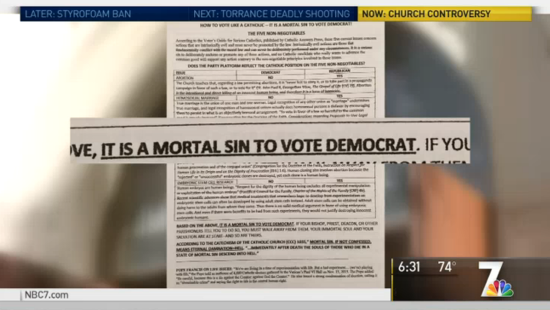 “It is a mortal sin to vote Democrat … immediately after death the souls of those who die in a state of mortal sin descend into hell,” the flyer said. It cited the five public policy issues from the “Voters Guide for Serious Catholics” and said that Democrats violate each of them, while Republicans cross none.

Two weeks later, that same newsletter included another flier saying that Clinton was guided by Satan:

“The devil does this through tactics outlined by Saul Alinsky with the outcome as Hillary Clinton stated ‘And deep-seated cultural codes, religious beliefs and structural biases have to be changed,’ to draw us away from God’s teachings regarding the sanctity of life to those of the world and its prince,” the bulletin said.

When Clinton said that, the San Diego Union Tribune points out, she was referring to “eliminating cultural barriers that prevent girls from attending elementary school and women from attending college as well as obstacles that stand between enforcement of domestic violence laws and access to reproductive and maternal healthcare.”

It’s also strange that the Church thinks Clinton is influenced by the Devil, but God wants everyone to vote for President Pussy-grabber. But in an institution where child rape was swept under the rug, it’s hardly surprising that a candidate bragging about sexual assault gets a thumbs up.

The Church, in case you’re wondering, denies having anything to do with this. The Diocese of San Diego admits the fliers were slipped into the newsletter by someone in the parish, but that didn’t happen with the approval of anyone in Church leadership.

“It’s not a mortal sin to vote for Democrats, number one. And number two, the church doesn’t take positions on this, and we’re not going to,” diocese spokesman Kevin Eckery said.

“For all I know someone thought that they were doing a service,” by putting it into the bulletin, Eckery said. “The pastor said it was not something he had reviewed or approved.”

Because the Church says this was an accident, any call to have the IRS revoke this Church’s tax exemption probably won’t get anywhere (and not just because IRS officials look the other way when church leaders promote candidates).

It’s a very convenient accident, though, isn’t it? It’s not like they ever “accidentally” send out bulletins urging parishioners to vote for Clinton.

At the very least, however, the city should find an alternative location for a polling place in the future. It may be too late to change spots for this Tuesday, but churches that endorse candidates, even accidentally, ought to lose that privilege.

November 4, 2016
Christian Who Said Cleveland Would Win the World Series Now Says Their Loss Was Part of God's Plan
Next Post

November 4, 2016 Sheriff Credits "God's Grace" After Missing Woman Found in Metal Container on Kidnapper's Property
Browse Our Archives
What Are Your Thoughts?leave a comment