Evangelist Franklin Graham said this week during an event hosted by the American Family Association that evangelical Christians were “on the precipice of losing the United States of America” if they didn’t vote the right way. Whichever way that might be, wink wink nudge nudge. 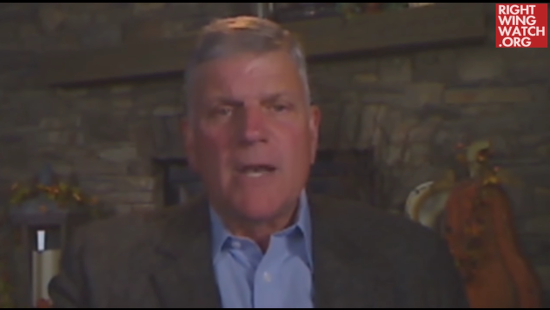 “We’re going to lose this country,” he said, if conservatives evangelicals don’t get involved in political activism or show up at the polls.

He urged viewers to vote for the candidate who will appoint “pro-life judges” to the Supreme Court and “protect Christians.”

At one point, Graham used the false equivalence that “both of these candidates are flawed,” comparing Hillary Clinton‘s email servers to Donald Trump‘s “potty mouth.”

As if that’s the concern about Trump: His bad language.

All he cares about is getting anti-abortion judges on the Supreme Court, a decision that would inevitably force women to resort to unsafe alternatives to have the procedure done.

For Graham, anything and everything Trump does is perfectly fine as long as he appoints Supreme Court judges who ignore precedence, common sense, and basic decency.

This is a man who cares more about babies that don’t exist than people who do, all in the name of a God who will eternally torture those who question his existence. What a sad, despicable man.

But I hope he’s right. If Clinton wins, maybe the stranglehold evangelicals have on our political process will indeed be gone for good. We’ve seen what they’ve done with their power and it’s horrifying. No one’s stopping them from preaching whatever bigoted things they want in their churches. But when it comes to public policy, we’re all better off when they’re not making important decisions.

And unlike Graham, I have every intention of voting for the Christian on Tuesday — not the candidate who just pretends to be one to get elected.