Iowa Congressman: It’s “Beyond My Pay Grade” To Tailor My Message to Non-Religious People

Blum didn’t give an answer. Instead, he treated the exchange as if Scott had asked him a “gotcha” question. 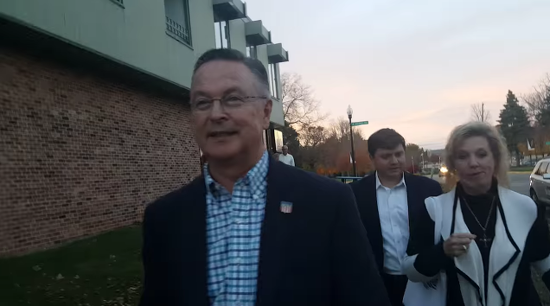 SCOTT: Mr. Blum, I’m a constituent in your area. I’m curious: I’m a non-believer. I’m curious how will you tailor your message to us… as non-religious…

SCOTT: Beyond your pay grade? You’re representing us. You’re being paid to represent us. I’ve asked many presidential candidates the same question and they’ve all taken my question.

SCOTT: So you’re not gonna —

BLUM’S AIDE: Can you leave us alone, please?

SCOTT: So you’re not gonna talk to non-religious voters?

BLUM’S AIDE: Can you please leave us alone?

SCOTT: I’m on the sidewalk. I’m just asking a question… so non-religious voters are not important to you, Mr. Blum? [Democrat challenger] Monica Vernon has taken questions about non-believers.

What sort of response was that from Blum? “Beyond my pay grade”? Justin didn’t ask him to explain some new astrophysics discovery. How hard was it for Blum to say, “My message is the same for all constituents. I support religious — and non-religious — freedom for everyone”?

And if you’d like to argue that it was unfair to ask a question with a camera after an event — as if it were some sort of ambush — keep in mind that Blum’s response wasn’t “I’m busy.” Instead, he dismissed the very idea of catering his message for non-religious people. It’s a disturbing thing to hear from any politician.

November 3, 2016
Iowa Governor: Parents Should "Provide Some Leadership" to Young Atheists By Taking Them to Church
Next Post