Even though it’s a very Catholic and very Mexican holiday, Día de los Muertos has become a rather important holiday to me. It was celebrated on November 1 and November 2 — the first day honoring dead children and infants, the second honoring dead adults — and gives people the opportunity to pray for their lost loved ones. 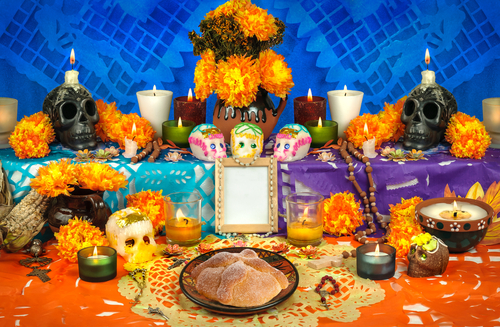 But why not enjoy it myself? What better way to celebrate my humanism by acknowledging that this is the only life I have, and that someday, I will also die? While the holiday obviously celebrates spirits, which I don’t believe in, it also offers a chance for introspection: what have I done this year to make the world a better place for those around me?

I found some of the quotes inspiring:

Like my maternal grandmother, I love to walk around barefoot. My grandfather, a Southern Baptist preacher, did headstands well into his seventies. When I do yoga, I’m thankful for whatever talent he may have passed down to me. My maternal grandfather worked on stealth airplanes and the heat shield for the space shuttle — and I love all things space and aviation related. Our loved ones really do keep on existing in some way after they’re gone.

“The least a tradition like the Day of the Dead does is remind us death is a part of life, and we can’t forget that. I believe what damages a society the most is not being aware of death. All of us will die.” — Guillermo Arriaga, writer

Even though the official holiday is over, I encourage you to take a moment to think about the family members and friends who have passed away — and be grateful for the life you have.

November 3, 2016
Iowa Congressman: It's "Beyond My Pay Grade" To Tailor My Message to Non-Religious People
Next Post