Two weeks ago, when Donna Brazile, interim chair of the Democratic National Committee, went on TV with Fox News’ Megyn Kelly, Kelly asked her about the WikiLeaks revelation that Brazile had done something unethical. More precisely, Brazile, who was a CNN news analyst until she got fired recently, had apparently leaked a town hall debate question to Hillary Clinton‘s team.

At the 1:06 mark into the exchange with Kelly, Brazile not only refers to herself as a “Christian woman,” falsely claiming some degree of automatic trustworthiness; she also mentions that she knows of “persecution” — and paints Kelly’s question as an example of it. 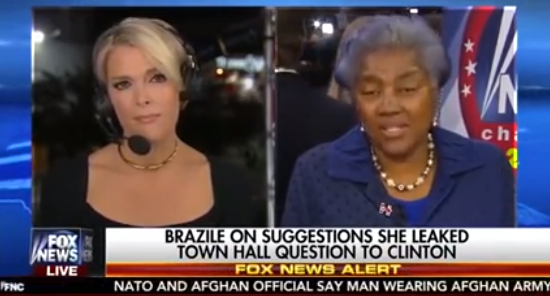 As a Christian woman I understand persecution, but I will not sit here and be persecuted. Because your information is totally false.

But Kelly was spot-on — and Brazile lied, if a second e-mail that emerged two days ago is any guide. From the Washington Post:

The Kelly-Brazile confrontation appeared to leave the matter unsettled, but then a second email emerged on Oct. 31… The subject line: “One of the questions directed to HRC tomorrow is from a woman with a rash.”

Brazile then explained in the email: “Her family has lead poison and she will ask what, if anything, will Hillary do as president to help the ppl of Flint.”

The Post‘s Glenn Kessler, who writes the paper’s Fact Checker column, studied the matter and concluded that Brazile had zero credibility on the issue.

It’s pretty clear that Brazile shared, on at least two occasions, questions that later came up in a CNN town hall and a CNN-hosted primary debate. In one case, she provided the essential text of a question; in another instance, she informed the campaign that Clinton would be asked about solutions to the Flint water crisis.

Brazile, in her interview with Kelly, gave rather slippery answers — that CNN never gave her questions, that she never got CNN documents. That leaves open the possibility that she got a question from another source. She tries a similar dance in her DNC statement, saying she “never had access to questions.”

Brazile, if you’ll recall, was appointed to replace the disgraced Debbie Wasserman Schultz, who is the target of a class-action lawsuit for allegedly rigging the Democratic primaries. As if to illustrate that no level of perfidy will truly torpedo a party hack’s career, Wasserman Schultz was given an honorary role within the Clinton campaign.

Anyway, if it matters, I don’t think Brazile’s serial infractions amount to a great deal if the yardstick is how much she improperly helped Clinton. Any presidential candidate worth his or her salt, regardless of prior knowledge of debate questions, will be able to formulate an answer to any public-interest topic.

But Brazile broke the rules she was bound by as a CNN analyst (hence her dismissal), and then she made matters worse with obfuscation and bald-faced dishonesty.

In my book, it’s even more irritating — make that scandalous — that she used her identity as a so-called Christian to try to weasel out from under an allegation of wrongdoing. Brazile played dirty pool, as American Christians tend to do on the topic of “Christian persecution.”

It’s too bad that the Post didn’t call her out on that part her lie.

November 2, 2016
Televangelist Jim Bakker: Donald Trump Has to Win or God Will Punish America for Allowing Abortions
Next Post

November 2, 2016 On the Next Dr. Phil: A Teenager Claims She's Pregnant... With Jesus
Browse Our Archives
What Are Your Thoughts?leave a comment