Televangelist Jim Bakker: Donald Trump Has to Win or God Will Punish America for Allowing Abortions

Televangelist Jim Bakker said on his show yesterday that if we don’t elect Donald Trump as President, God will punish the U.S. because of our abortion policies.

(Because giving women control over their own bodies is an unforgivable sin while repeated accusations of sexual assault, megalomania, constant lying, bigotry, and flat-out ignorance can just be swept under the rug.) 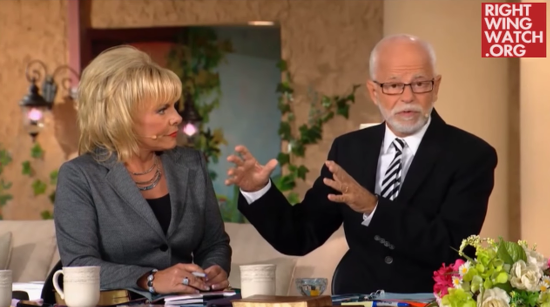 “This may be the most important television show you’ve ever watched,” he said. “I believe this election is the difference between having the time to really prepare for what’s coming on earth and going into, I believe this fall is really the beginning, and I hate to say it, I’ve never said it before, but could be the beginning of the fall of America. We’ve got a choice to make and we can do something.”

Later, Bakker told pastors Frank Amedia and Darrell Scott, who both have ties to the Trump campaign, that God chose Trump “to literally wake the church back up because we have accepted abortion. We have accepted it and God is so grieved by it that if you don’t believe me, you watch what’s coming on this earth because we have murdered our own offspring.”

If God “chose” Donald Trump, then He’s even more delusional than I thought. Why would the Almighty choose the guy who admittedly doesn’t practice Christianity and his running mate who uses faith as a weapon against groups he doesn’t like, when the Democrats have nominated a life-long Methodist and her Catholic running mate who went on a missionary trip and doesn’t go one speech without talking about it?

That said, I’m not surprised that Bakker is a Trump supporter. The televangelist is constantly spreading conspiracy theories as a way to enrich himself. (See: giant buckets of food.) They’re practically the same person.

November 2, 2016 Watch DNC Chair Donna Brazile Lie To Megyn Kelly While Invoking Christian "Persecution"
Browse Our Archives
What Are Your Thoughts?leave a comment