About a month ago, the National Institutes of Health announced that “sexual and gender minorities” (LGBT people and others) make up a distinct group that has “less access to health care and higher burdens of certain diseases, such as depression, cancer, and HIV/AIDS.” That designation means some federal money can be used by the NIH to study those issues and provide services for LGBT people specifically. Good news, right?

Not if you’re current Colorado State Rep. and Christian talk show host Gordon Klingenschmitt. Rather than applauding this decision, he claimed that additional research into these issues amounts to nothing more than “bonus pay” to LGBT people for their sexual orientation. 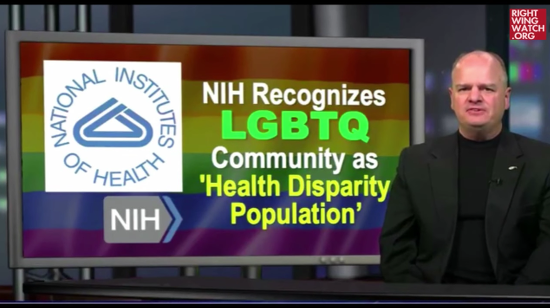 “I always worry a little bit when they say these people are under-served because what that means is they’re going to start pouring out more government handouts to people who behave a certain way,” Klingenschmitt said. “So now they’re going to get bonus pay to treat the diseases which they bring on due to their behavior. Your taxpayer dollars at work, I can see that coming soon.”

Because, as we all know, cancer and gay are genetically linked…

Klingenschmitt also doesn’t get that LGBT have to deal with depression more often than the general population in large part because of what bigots like him say every day. When a sizable chunk of your entire faith demonizes homosexuality or the very idea of being transgender, serving as an obstacle to them obtaining equal rights, I’m surprised the problem isn’t worse.

And, just to state the obvious, LGBT people aren’t receiving “bonus pay.” The government isn’t sending out checks to lesbians all over the country.

The silver lining here is that, even if Klingenschmitt is guided by his Christian faith, the people at the NIH are guided by science. More research will be done on an underserved population, hopefully helping them out in the long run.

Meanwhile, the countdown continues for Klingenschmitt’s last day in office.

November 1, 2016 Christian Dominionism’s Fruitful Distortion of American History
Browse Our Archives
What Are Your Thoughts?leave a comment