Donald Trump, whose political career took off by claiming President Obama wasn’t born in the U.S., is no stranger to pulling “facts” out of his ass. He thinks climate change was a hoax perpetrated by the Chinese. He even said Ted Cruz’s father was linked to JFK’s assassination. And, of course, he frequently praises the “king of conspiracy” Alex Jones.

This is a man who knows how to trick ignorant people into believing the most absurd theories out there. You start with a tiny, out-of-context detail. You make your claim with confidence. You attribute more evidence to other people, regardless of their credentials. And then you just keep repeating it until people — dumb, gullible people — accept it. If anyone challenges you, just say you’re only asking questions.

On last night’s Full Frontal, Samantha Bee showed how two can play at that game by making an eight-minute argument for how Donald Trump can’t read. 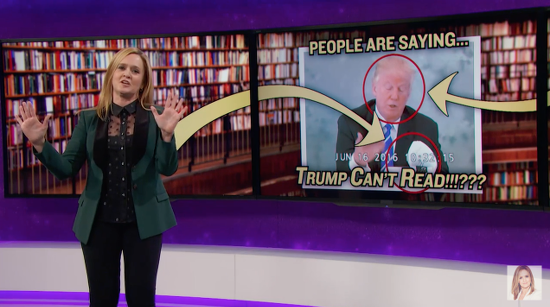 There’s more evidence for Trump not being able to read than there is Obama not being a U.S. citizen.

October 31, 2016
How Does Captain Disillusion Work His Magic?
Next Post