Atheist comedian Tim Minchin, who until now has been relatively silent about the 2016 election, encouraged his supporters Sunday to “crush” Donald Trump and vote for Hillary Clinton.

Speaking during a rare performance at the Lobero Theater in Santa Barbara, California, Minchin urged fans to vote for Clinton over Trump despite any perceived scandals surrounding her campaign: 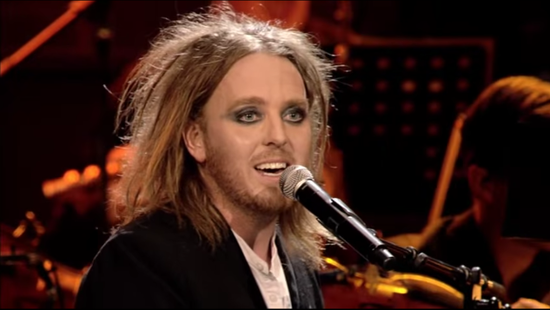 “I suppose, statistically, it’s possible that people in this room — some of them will be voting for Trump, and you’re really unforgivable… If you’re in Santa Barbara at the Lobero watching cabaret on a Sunday night, you should probably know better.”

Minchin added that he has been working on a film, and not doing shows, for the last few years. That hasn’t prevented him from keeping up with our elections, though.

He said Clinton, having been Secretary of State for the “most militaristic nation in the history of the world,” was “far from bloodless, hands-wise,” but scolded those who would consider voting for Trump. He compared the real estate magnate to a “children’s party clown.”

And then the musical comedian used an analogy to demonstrate why even those who hate Clinton should vote for her. He compared the presidential election to replacing Wells Fargo’s CEO.

“If you’re going to replace the head of Wells Fargo, the situation right now, politically, is like, you’ve got some asshole banker who has come up through the system, who has worked at all these horrible places that exploited people and gave loans to people who can’t afford them… People don’t want to put him in charge of the bank, even though he’s got 40 years of experience and he’s really, really smart… ‘We don’t want to put him in. We’re going to put in this children’s party clown!’”

He recommended that the people in his analogy choose the banker they don’t like and “vote for someone else next time.”

Between songs, Minchin attacked Trump further, even calling him a “fuckin’ evil fuck.” Trump wasn’t clever, he explained, but he was “naturally good at appealing to people’s divisive instincts without saying the actual thing.”

“He manages to be racist without it being very easy to put your finger on the word or the particular phrase.”

Regarding Trump’s recorded comments in which he bragged about sexually assaulting women and grabbing them by the pussy, Minchin said bluntly, “I literally don’t know a man who talks like that.”

“I wouldn’t let that person be my friend — let alone the president.”