The Green Party presidential candidate whose campaign relies heavily on criticism of Monsanto, Merck, and Time Warner is a stockholder in all three. She also has significant investment ties to many companies involved in global deforestation, widespread chemical pollution, and human rights abuses.

I learned these startling facts from taking a close look at Jill Stein‘s finances, a study in dramatic contradictions between her stated ideals and actions. I was prompted by a recent report in the Daily Beast on other aspects of this disconnect.

Stein rarely misses an opportunity to use her party’s greatest scare word Monsanto. The agribusiness that produces GMO seeds still remains the Greens’ symbol of evil, despite scientists — and increasingly, environmentalists — who say GMO crops increase yields, feed more starving people, and reduce both pesticide use and wildlife habitat loss.

Stein says she wants GMOs banned and their producers jailed.

Privately, however, the Greens’ crusader for purity invests her personal wealth heavily in GMO agribusiness, including the devil itself, Monsanto.

Stein has invested between $0.8 and $1.7 million with the Vanguard Group, the world’s largest institutional holder of Monsanto stock (per NASDAQ on Oct 28). A Vanguard 500 Index report from June 30, 2016 showed a significant holding of Monsanto shares.

In fact, Stein is a shareholder, via Vanguard, in a Who’s Who of the world’s largest GMO and pesticide producers: Monsanto, DuPont, Archer Daniels Midland, Dow Chemical, ConAgra, and Amgen. These names all appear in the holdings lists (links above) for the specific Vanguard funds she owns.

Stein is also an individual stockholder in chemical manufacturer 3M, with between $50,000-$100,000 in shares. 3M is a major name in environmental news for creating a now-banned dispersing agent of a type called PFCs (perfluorochemicals), or PFASs (poly- and perfluoroalkyl substances). PFASs persist without breaking down in the environment and have been found to be both toxic and bioaccumulative. They were so widely used, they’re now present around the world in our drinking water, bloodstreams, and wildlife, potentially increasing a range of health risks.

Through Vanguard, Stein also owns shares in chemical manufacturer DuPont, 3M’s main customer for its PFASs. DuPont continued releasing it for years after its own research showed its dangers.

She also invests in other synthetic chemical manufacturers through funds managed by the Bessemer Trust.

Stein recently accused political satirist John Oliver of conspiring with his corporate bosses to aid her opponent, Hillary Clinton, after he criticized her policies on his HBO show Last Week Tonight. (Oliver has leveled plenty of criticism toward all four presidential candidates.) Much like Donald Trump and his unsupported accusations of journalistic conspiracy, Stein offered no evidence for her accusation other than the facts that his show is owned by a large corporation, Time Warner, and that his huge popularity among liberals has made him a millionaire. She posted this on her campaign site:

There will always be the John Oliver’s of the world. His hands are far from clean — he’s a millionaire, yet proclaims bailing out students in debt as a wholly unworkable plan. Plus, his employer — Time Warner — is among Hillary’s top 10 donors! 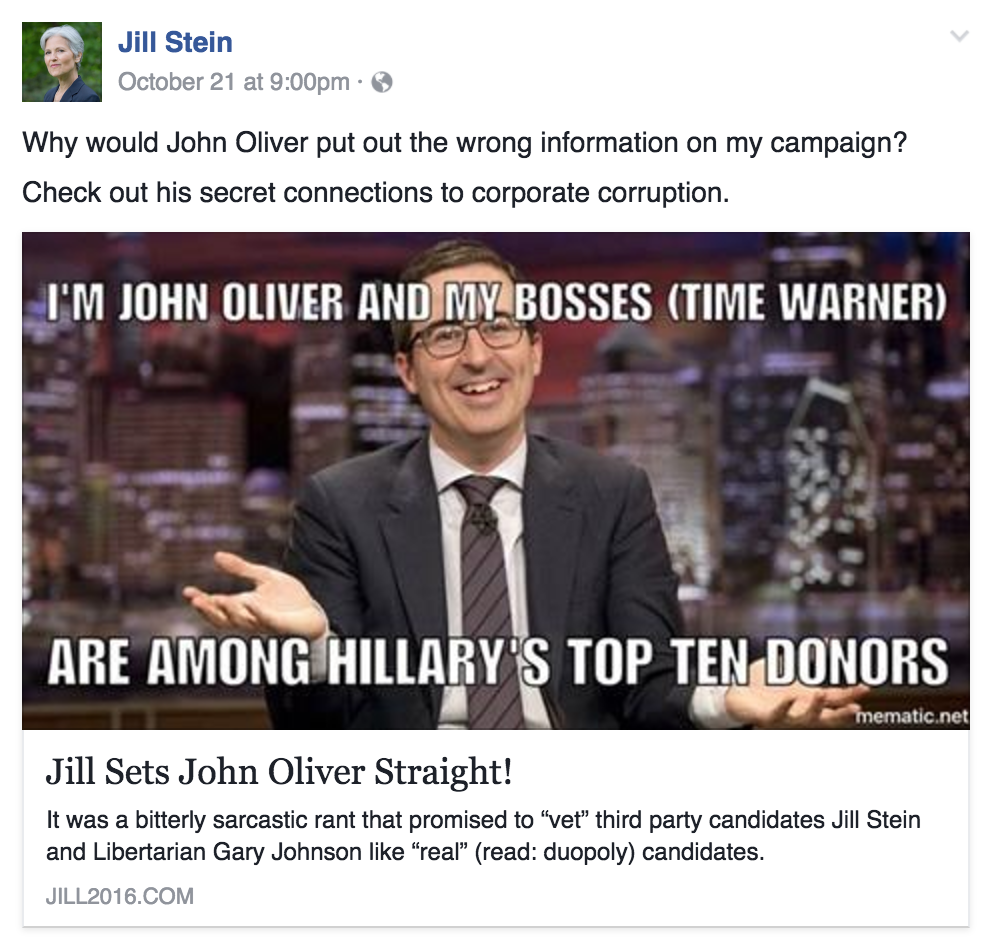 Remember the Vanguard Group? They’re not only the largest institutional investor in Monsanto, they’re also the largest investor in Time Warner. The company appears in Stein’s specific Vanguard fund holdings. If John Oliver is a corrupt corporate shill simply because he works for Time Warner as an employee and is a millionaire, what does that make Stein, who’s part-owner of Time Warner and a multi-millionaire? (Besides Oliver’s boss, that is.)

Stein implies she considers all 40,000 Time Warner employees unclean… for helping to make her rich.

Stein owes them, and John Oliver, an apology.

Stein is famed for her oft-repeated claims of a conspiracy among the FDA, CDC, and “Big Pharma,” which she insists is so corrupt that American vaccines and drugs are untrustworthy. This is a theme for which she has come under fire from public health advocates for sowing vaccine paranoia and pandering to the anti-vaxxer movement. As evidence for corruption of the U.S. vaccine program, she routinely but irrelevantly offers Monsanto’s supposed role in U.S. agriculture policy.

Journalists’ requests for actual evidence of an FDA-vaccine conspiracy have led Stein to start raising the spectre of the drug Vioxx as proof that FDA oversight of vaccines can’t be trusted.  This was an anti-inflammatory pulled from the market in 2004 by Merck after evidence of increased heart disease surfaced, a difficult choice when millions of arthritis sufferers were reporting no other drug provided comparable pain relief. Merck is also a maker of the MMR vaccine.

You may be guessing by now where this is headed…

This has been reported before, not widely, and not in the context of her Vioxx accusations. She is also an individual shareholder with between $15,000-$50,000 in pharmaceutical giant Johnson & Johnson, while her mutual fund holdings are loaded with most of the remaining Big Pharma names, as the Daily Beast reported.

Stein responded “Let me give you a piece of that evidence…” then referred to the “recent” Vioxx scandal (it was 12 years ago) in what she termed industry “tampering” with the FDA to suppress evidence of drug risks.

War, drones and the defense industry

A July report by Friends of the Earth lists the Vanguard Group as the third largest investor in the world’s greatest cause of deforestation today: the global palm oil market:

…millions of hectares of rainforests and peatlands [that] have been destroyed for plantations in Southeast Asia, Latin America, and sub-Saharan Africa… In all of these regions, deforestation is driving the loss of species, threatening the livelihoods and cultures of millions of local people, and contributing to climate change at an alarming rate. …

Many of these workers are trafficked into bonded labor; forced to work and live under extreme conditions with limited legal recourse; suffer from abuse or the threat of abuse; or are children… land acquisitions are often carried out with a lack of community consultation and consent… palm oil land grabs devastate forest ecosystems and violate the human rights of affected communities through forced evictions, land clearing, forced labor, and other abuses…

In a story titled “US investors ploughing billions into palm oil,” the Guardian reported that while many firms are increasingly pledging to end investment in deforestation, “others have no processes in place to deal with companies that commit human rights and environmental abuses.” Vanguard appears to fall in this latter category, and failed to reply to the Guardian‘s request for comments.

Scientists are warning that “corporate inaction on deforestation” could make it impossible to achieve global warming reduction goals. The fate of many tropical wildlife species is at stake, including orangutans which may be driven to extinction in the wild within a decade.

Stein’s response to earlier questions about her investments

None of this is to say that everyone with an unmonitored pension or mutual fund is a monster. What it is saying is that 1) if Americans don’t make use of our financial leverage, who will? and 2) politicians who make a career out of attacking others for supporting harmful corporations shouldn’t live in a house made of blown Venetian glass.

But after the Daily Beast opened the issue of her investments, Stein issued this response:

I have no control in management or decision-making. Sadly, most of these broad investments are as compromised as the American economy — degraded as it is by the fossil fuel, defense and finance industries… While I have explored “green” mutual funds, I found their investments in fracking and large scale biofuels not much better than the non-green funds… We need real options for ethical investing.”

It’s reminiscent of the recent debates when Clinton accused Trump of not paying taxes for years. Trump’s reply was essentially, “It’s not my fault, it’s yours, for letting laws exist that I can exploit.”

One can’t help but think of the resulting memes with Trump protesting “Damn you, Hillary, stop me before I’m forced to go another year without paying taxes!”

Stein does seem to blame shadowy forces, presumably named Clinton, for not stopping her from investing in questionable corporations.

She also attacked the journalists for doing their job, suggesting they were part of the same conspiracy as John Oliver. The report, she said, was

willful misinformation and manipulative framing… a blatant smear attack and hypocritical attempt to suggest conflicts of interest… an imagined conflict of interest, perhaps to distract from… the Clintons…

Though Stein opposes journalists reporting on contradictions between a politician’s words and actions, she does find it fair for politicians to deflect criticism by targeting their opponents’ children, judging by her rebuttal’s title: “Jill Stein Responds to Daily Beast Smear Attack By Calling for Disclosure of Chelsea Clinton’s Role as Director of Beast’s Parent Corporation.”

Stein argues that, well, at least she’s “a far cry from the Clintons’ back room fundraising and quarter-million dollar speeches for the predatory banks, health insurance industry, and fossil fuel tycoons.”

True. Stein earns her wealth from Goldman Sachs, predatory banks, the health insurance industry, and fossil fuel tycoons by supporting them with investments. Not for giving speeches to them, which is just dirty.

Stein said the time to deal with climate change is extremely limited and that it is not too much to ask for colleges and universities to divest 100 percent of their investments in fossil fuel companies… Stein said the country also needs to divest 100 percent of its economy from fossil fuels, and said as president she would call a state of emergency to deal with climate change…“This is not a sacrifice, this is a step forward to a better world that works for all of us,” Stein said.

As I mentioned earlier, Stein is a shareholder in ExxonMobil, Chevron, Occidental Petroleum, ConocoPhillips, Duke Energy, and Marathon Oil. This should be a troubling level of hypocrisy by anyone’s standards.

There are some comments from people (who didn’t fully read the piece) that Stein somehow “has no choice” in her investments and “mutual funds don’t count.”

Remember who we’re talking about. Not me, not you, struggling along with our own muddled priorities, but the leader of the American Green Party calling for radical environmental and economic change, a crusader for purity who calls for the jailing of political opponents and corporate targets.

This same person chose to enrich herself with the one fund out of thousands that’s very publicly the top institutional backer in the world of global deforestation.

Wealthy Americans whining “I’m not responsible” and “my personal actions don’t matter” are wiping out species after species; we will probably lose orangutans and Sumatran tigers from the wild within a decade. Our choices fucking matter. The one person on the planet who should be challenging that attitude is Jill Stein.

Among thousands of funds, she bypassed all green funds and chose the one fund that is the world’s biggest institutional investor in Monsanto… while using Monsanto as the symbol of ultimate evil in so many of her speeches.

She chose to own, not through index or mutual funds, two giants of Big Pharma, while nearly every day shouting that they’re all criminals.

Meanwhile, all day every day, she’s pointing a finger at others and calling them unclean, like she did to John Oliver. It’s inconceivably hypocritical and demonstrates bizarrely poor judgment.