The Genesis II Church of Health and Healing makes a lot of unsubstantiated claims. Specifically, “Archbishop” Mark Grenon said at a recent training seminar that his “miracle mineral solution” (MMS) would cure everything from breast cancer to leukemia to HIV.

ABC News was onto him, though. Two producers paid for and attended one of his seminars to document his claims, while reporter Brian Ross tracked down the founder of the church, Jim Humble, in Mexico.

He also approached Grenon about his tactics… which the “Archbishop” didn’t handle well at all. 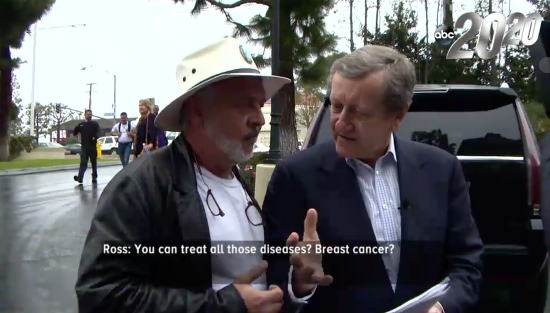 After the confrontations, Humble wrote in a message to followers that he never said any of those things he totally said:

“Today, I say MMS cures nothing!” he wrote. Now the founder of the church, who spent the last dozen years promoting MMS as a cure-all, says MMS is just one of a number of “important health tools, to combat the ill effects of poor foods, and chemicals that make us sick.”

So how was any of this legal to begin with?

Well, there’s a reason they used a church as a cover…

It would be a violation of federal law to sell such a “miracle cure,” but Grenon claims he is protected because he is part of a church and the “miracle cure” is a sacrament that is not being sold but is offered for a “donation.”

That’s not exactly true, though. Doing something illegal, like selling miracle cures that don’t work, is still a criminal act even if you’re doing it as part of a religion. Whether any legal action will be taken against the church remains to be seen, though one of the distributors of the “miracle” cure has already been convicted by federal prosecutors.

October 30, 2016
Jill Stein Privately Invests in Global Deforestation and the Corporations She Publicly Attacks
Next Post