Indiana Mother Who Beat Her Son with a Coat Hanger Because of Jesus Gets Year of Probation October 29, 2016 Hemant Mehta

A mother in Indiana will serve a year of probation — and nothing more — after admitting guilt to beating her 7-year-old son with a hanger and leaving him, over time, with 36 bruises all over his body. She cited her evangelical Christian beliefs as the reason for the abuse. 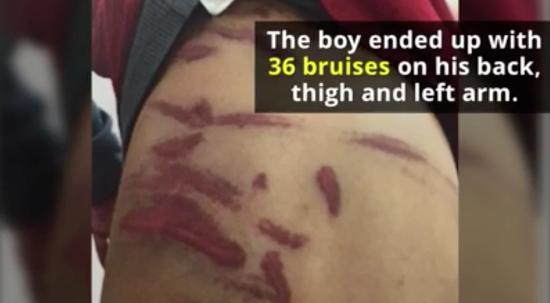 Marion Superior Judge Kurt Eisgruber accepted a plea agreement Friday in which [Kin Park] Thaing admitted she committed battery when she struck her son in February.

While Thaing pleaded guilty to felony battery, the agreement directed the judge to reduce it to a misdemeanor.

In exchange, prosecutors dismissed a neglect charge and a more serious charge of felony battery.

Where does Christianity fit into all of that?

“I was worried for my son’s salvation with God after he dies,” Thaing said in court documents. “I decided to punish my son to prevent him from hurting my daughter and to help him learn how to behave as God would want him to.”

Thaing’s lawyer actually cited the Religious Freedom Restoration Act — the same law Christian business owners used to justify discrimination against LGBT customers and which then-Gov. Mike Pence signed into law — as cover for her actions, because she was simply beating her child in accordance with her religious beliefs.

Once again, religion was used as an excuse for something we would never consider acceptable otherwise. And their plea deal means very little will change. If she can abuse her child like that and walk away with nothing more than temporary probation, what’s going to stop other Christian parents from acting the same way?

(Image via 12News. Thanks to @SkyGodless for the link)