In an interview with comedian Julia Sweeney (who will be interviewing Richard Dawkins in two upcoming public events), a reporter from Western Michigan’s Revue asked her why she doesn’t share the same “religion has to go” attitude of other New Atheists.

Her response was excellent: 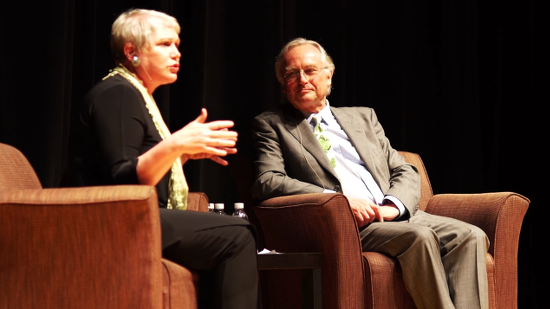 So often I think that the New Atheists in general — and I’m not particularly saying this about Richard Dawkins — they’re often white intellectuals who came from a privileged and intellectual background. They’re not rejecting their culture to not believe in God. In fact, it’s really part of their culture to not believe in God. So the idea that those people are saying the others should just leave (religion), it’s ludicrous.

[Reporter Josh Veal: It’s rare to hear that kind of nuanced approach to the issue.]

I know! That’s been my hard time with the atheist groups. There was this one moment when I had this friend who I love, and she said, “Julia, religion is evil! Evil!” And I was really taken aback. I said, “No. It so isn’t evil! It’s just about culture transmission.” It can have bad parts to it, but I feel like every atheist I meet, especially at the conventions and stuff, they don’t realize what a privileged position they’re in.

To me, the people who are the reverends and the preachers who left, they literally lose everything when they say what they think. Those are really the heroes.

A lot of atheists online have been making this case for a while. If logic and reason were all we needed to turn people into atheists, it would’ve happened already. It’s just not that simple. We have to keep in mind that we’re not just asking people to stop believing in nonsense. In many cases, we’re asking them to walk away from their friends (from church), their social safety net, their careers, their sense of comfort, etc.

Unless we can address those concerns adequately, we’re going to have a hard time convincing that group of people that they should stop being religious. Religion is more than just a belief in God for them. It’s what their entire lives revolve around.

Sweeney’s point is that we’re fooling ourselves if we think pointing out biblical contradictions or the irrationality of certain religious beliefs is enough. It’ll work for some people, but others will hear you… then continue going to church because religion, in their mind, is more than just believing in a Higher Power.

I’d love to see her ask Dawkins about that point when she interviews him.

October 29, 2016
VA Staffer Hauled Away By Cops After Questioning Proselytizers Who Had No Right To Be in Hospital
Next Post