Why Atheists Can (and Should) Enjoy Religious Influences October 28, 2016 Hemant Mehta

Why Atheists Can (and Should) Enjoy Religious Influences

I’m no longer a believer; does that mean I can’t enjoy religion-influenced…? Let me stop you there. Whether you are talking about music, tattoos, or even church itself, the answer is, “No.”

The best thing about atheism — other than the fact that it’s free — is that it isn’t a religion or a structure on which to base your life. Non-believers don’t have a unifying moral code. You can listen to any music you’d like, wear anything you want, and participate in any ritual that sounds appealing. As long as you don’t actively believe in the existence of one or more supernatural deities, you’re still an atheist.

Whether you’re a former Christian who still listens to Switchfoot and P.O.D., or an ex-Muslim who still reads the Qur’an in your free time, you might be wondering if you’re a hypocrite. The fact is that religion touches almost everything in our society, from popular media to the legal system, so religious symbols and influences are impossible to avoid. What should we, as atheists, do? I say we should embrace them when we want to and learn from them when we can. 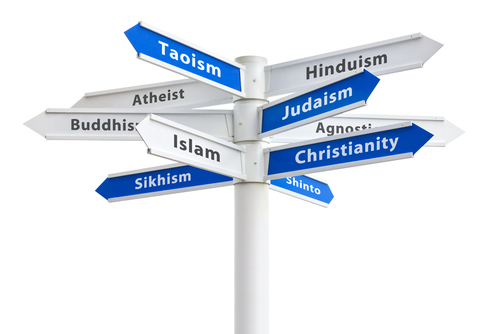 Not only is it possible for atheists to enjoy activities and symbols with religious influences, but some atheists are themselves religious. Atheists don’t believe in gods, but some identify with non-theistic religions, such as certain forms of Satanism or Buddhism, and still others practice non-theistic versions of traditionally theistic religions. Thomas Jefferson, a self-identified Christian deist, is a good example of the latter. While he never identified as an “atheist” explicitly, he was heavily influenced by Christianity without being weighed down by supernatural beliefs. He even published his own Bible representing his naturalistic Christian mindset. The late Christopher Hitchens described it well:

Sometimes known as “the Jefferson Bible” for short, this consists of the four gospels of the New Testament as redacted by our third president with (literally) a razor blade in his hand. With this blade, he excised every verse dealing with virgin birth, miracles, resurrection, and other puerile superstition, thus leaving him (and us) with a very much shorter book.

It’s entirely possible there are hardcore anti-theists (sometimes referred to as “Fundamentalist Atheists”) who will argue that enjoying religious influences makes you part of the problem: you’re propping up a bad idea by embracing the culture surrounding it. But that argument isn’t supported by the evidence. In fact, this is an example of the black-or-white logical fallacy. You can appreciate religious art, for example, without adhering to that religion or endorsing violence in that tradition’s name. Some atheists even pray, and that doesn’t make them any less atheistic! You can live in the gray areas.

I don’t have to either endorse all actions done in the name of religion or condemn its practice entirely. I hate religious extremism, but I don’t hate meditation or meditative prayer; I hate that religious ideals have consistently impeded science and invaded secular governments, but I don’t hate food drives and soup kitchens sponsored by churches; I hate the “God is on our side” mentality and that millions of people think that religion is necessary to live a happy and moral life, but I don’t hate peaceful religious practices or people who happen to believe differently.

The bottom line is that religion is a part of our culture and, whether we like it or not, it is probably here to stay. It is well established that religion itself is a cultural universal and that it likely has (or had) evolutionary benefits, so why don’t we learn all we are able to from it? There are positive and negative aspects of every religious tradition, so why not salvage what we can?

I, for one, understand the intrigue associated with religion and the supernatural. I’ve always enjoyed learning about all kinds of different faiths and why people believe in them, and that’s part of why I majored in Religious Studies in college. However, I’ve never felt the need to adopt a religion because I have a firm grasp on my life as it is. I don’t think I need the 10 Commandments or the 11 Satanic Rules; I just do what I think is right and enjoy my life without any strict dogma or doctrine. I’m not just an atheist, though; I’m also a fan of good ideas — no matter where they come from — so I look for them in every religion and philosophy. Regardless of what you believe, you’re free to do the same.

October 28, 2016 Watch Matt Dillahunty Discuss Whether Jesus Really Existed
Browse Our Archives
What Are Your Thoughts?leave a comment