Christian pseudo-historian David Barton, who lies about Thomas Jefferson, lies about having a Ph.D., and lies about numbers, is now lying about election turnout.

During a speech last week at Harvest New Beginnings church in Illinois, Barton urged his fellow Christians to vote, saying they had a responsibility to do it. And then he went even further, saying that everyone in America always voted for the first 200 years of our democracy. 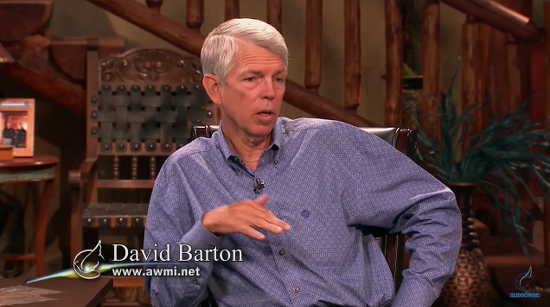 “We’ve been given something that we have a responsibility to use,” Barton said, “so it’s not our choice whether we vote or not. And that’s why you will find that for the first 200 years after we started having votes in America, voter turnout was 100 percent. We preached this from the pulpit, I can give you the Bible verses on it; it was our responsibility, it was not our choice. God gave us this nation to be stewards over.”

That’s a lie. We know that’s a lie. As if no one ever got sick on Election Day for the first 200 years of our nation’s history…

Voter turnout during a presidential election year has never topped 82.6% of the eligible voting population (that happened once, in 1876). In fact, in 1820, voter turnout was a record low 10.1% — because the re-election of James Monroe, who basically ran unopposed, was a given.

Needless to say, voter turnout has never been perfect. Not even close.

But that’s how David Barton works. He assumes that anything that comes out of his own mouth must be a fact because he’s working for Jesus. He proves once again that belief in the Christian God doesn’t make you a better, more ethical person.