Congratulations, residents of Canyonville, Oregon! You are now just as free as everyone else in this country to open up shop and start making suckers out of anyone willing to believe you have magic powers. 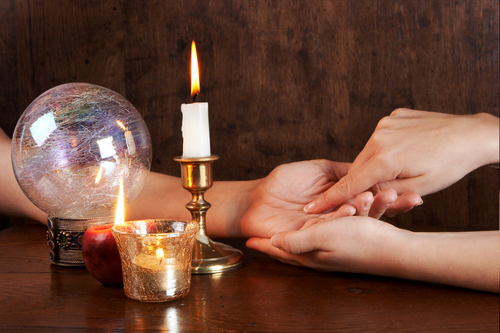 The town, this week, struck down an ordinance established in 1947 which banned the practice of the occult arts, including “fortunetelling, astrology, phrenology, palmistry, clairvoyance, mesmerism and spiritualism.”

Although the town’s council voted to repeal the ordinance 5-1, there were those in the 1,900-person town who were opposed to the decision. Some felt it could lead to “people sacrificing babies, skinning cats, or other sinister activities.” Those, of course, are activities that are already illegal. (Also, I’m not sure that the cat-skinning is an actual thing for anyone outside of future serial killers beginning to exhibit symptoms of the Macdonald triad.)

The vote came after a city attorney declared the ban to be unconstitutional; the Mayor agreed that it was a violation of the First Amendment.

“When it comes to the amendment for free speech, that’s the one we don’t like, because we want our way and not their way,” [Mayor Jake Young] said. “It’s still an amendment in the Constitution.

The lone vote against repealing the ordinance was Councilor Buddy Kovachy, who said that the city had a right to regulate commerce.

He might actually have a point. Although we should never prohibit the free exercise of religion or spiritual beliefs, arguing that we ought to have rules in place to prevent customers from getting scammed has some merit.

While anyone ought to be allowed to read palms, play with an Ouija board, or do that “light as a feather, stiff as a board” thing in the privacy of their own slumber parties, there’s an argument to be made that if someone is going to charge money for a service, they should be able to either guarantee that service or have some sort of proof that they have the ability to provide it.

I could hardly set up shop as a doctor without obtaining a medical degree, or tout my roofing skills and then repair someone’s house with Play-Doh without getting sued or thrown in jail. I couldn’t legally sell someone the Brooklyn Bridge. However, if I were a terrible person, I could declare myself a psychic and start charging people money to tell them where their missing children are, or what their dead grandmother has been up to, or at what dive bar their soul mate is drinking this evening. No certification or skills necessary. (In New York City, so-called psychics have already been arrested on charges of fraud.)

I’m not suggesting that people ought to be banned from making a living as a psychic, astrologer, or homeopath — simply that those professions ought to be regulated. They ought to have to prove that they have magic powers before charging for them, and customers ought to be reimbursed if their work is faulty. It seems only fair.

And if that’s a non-starter, how about at least making it explicitly clear from the outset that these services are for entertainment only and clients are communicating with actors instead of people with actual powers?

(via News-Review. Image via Shutterstock. Thanks to Francis for the link)

October 27, 2016
Orange (TX) Officials Will Spend $20,000 on "Inclusive" Holiday Display That Shuts Out Atheists
Next Post