A Sub Yelled at a Student for Sitting During the Pledge, and the District Responded Perfectly October 27, 2016 Hemant Mehta

A Sub Yelled at a Student for Sitting During the Pledge, and the District Responded Perfectly

Last Friday, at Carlisle High School in Pennsylvania, a student named Admir remained seated during the Pledge of Allegiance, only to get yelled at by the substitute teacher, Mrs. Scholl. She told Admir, who came here from Bosnia and protested the Pledge because of our actions in the Middle East, “maybe you would just like to leave the country.”

Here’s the good news. The students defended their classmate — starting the hashtag #WeSitWithAdmir — and the Superintendent took swift action against the sub: 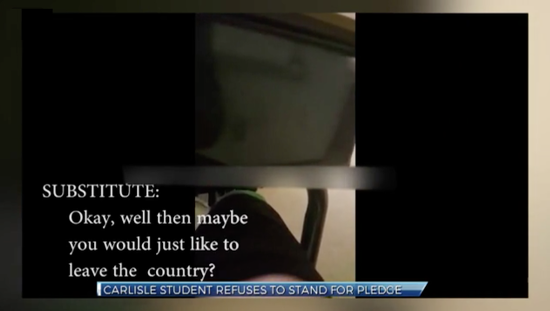 “The fact is that the student was not disrespectful whatsoever,” Friend said. “When he remained seated, she had some additional comments that we found totally inappropriate.”

Furthermore, the District told vendor Source4Teachers that all future substitute teachers provided to them must be made aware that students have the right to not participate in the Pledge.

What a relief to see a District handling this situation the right way. Admir did absolutely nothing wrong, the substitute didn’t know what the hell she was talking about, and everyone seemed to take Admir’s side.

It’s so nice when everything works out as it should.

It wasn’t always like this, though. Just last year, in the exact same school district, a nurse refused to treat a student after he also stayed seated during the Pledge. The American Humanist Association’s Appignani Humanist Legal Center warned the District about possible legal action at the time.

Clearly, District officials had no intention of ever letting ignorant staffers make them look bad again. And they did everything right this time around.