The Catholic Church has been on a kick lately, trying to make life more complicated for believers as they’re dying — or right after it happens.

Now, the Vatican has issued new guidelines about how to handle cremations, which have become increasingly popular even among Catholics who choose that route over more traditional burials. 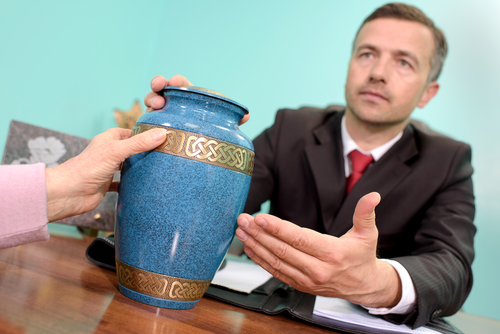 The guidelines essentially punish anyone who opts for cremation if their reasons are at odds with Catholic teaching.

Want to become “one with the Earth”? You’re violating doctrine.

Want to spread your ashes over Wrigley Field after the Cubs win the World Series? Not if you want to remain in the good graces of the Church.

Want to preserve some of your ashes in jewelry so it can be worn by your children and grandchildren? The Pope ain’t having it.

Want to keep the ashes in an urn in your home? Even that doesn’t get a free pass.

Beyond respect for the deceased, the document notes that burial in a cemetery “encourages family members and the whole Christian community to pray for and remember the dead, while at the same time fostering the veneration of martyrs and saints.”

Burial prevents the forgetting of the loved one, as well as “unfitting or superstitious practices,” the document states.

For that reason, the Vatican said that cremation urns should not be kept at home, save for “grave and exceptional cases dependent on cultural conditions of a localized nature.”

Burial also takes up unnecessary space and suggests that there’s something special about a dead body six feet underground. As if cremating your body or donating it to science somehow makes God unhappy, because — you never know — what if He wants to reanimate your corpse?

All these new rules do is limit options for Catholics. Color outside the lines and the Church will make you pay for it. We already know the Church wants to dictate how you live your life. Now they want to regulate your death, too? I guess it’s never too late to make believers feel guilty.

A deceased loved one, said [Italian Rev. Roberto] Salsa, should be in a place “accessible to everyone, where they can be venerated,” so a cemetery is preferable to a home. And scattering ashes can be “misunderstood as a sort of religion of nature, while we believe in resurrection,” he said. “It’s important to insist on that.”

That makes no sense at all. Even if you believe in resurrection, what’s stopping God from putting your ashes back together? He can bring a dead body back to life, but he can’t put together a human jigsaw puzzle?

None of this, however, means that Catholics will actually follow the new guidelines. After all, it’s not like they care what their religious leaders have to say about homosexuality or abortion. 58% of practicing Catholics support marriage equality, even though the Church condemns it, while well over 40% of Catholics believe abortion should be legal in most or all cases.

If so many Catholics can’t get on board when it comes to two of the most polarizing social issues in our country, why would guidelines from the Vatican make a damn bit of difference?

I hope cafeteria Catholics, who pick and choose which aspects of their faith to adopt, see this as Vatican overreach and decide once and for all to sever all ties with the Church.

God won’t be upset if you cremate your body. God doesn’t give a damn. Live your life and plan your death however you’d like.