After Jack Chick’s Death, a Former Pentecostal Christian Recalls the “Fear Pamphlets” She Gave Out

One more reflection on the death of Jack Chick.

Heather Emme attended a Pentecostal church in Toronto when she was younger, and Chick tracts were a part of her childhood. She was an evangelist and those little comic books were her tools. But they had an effect far beyond the strangers she was trying to convert: 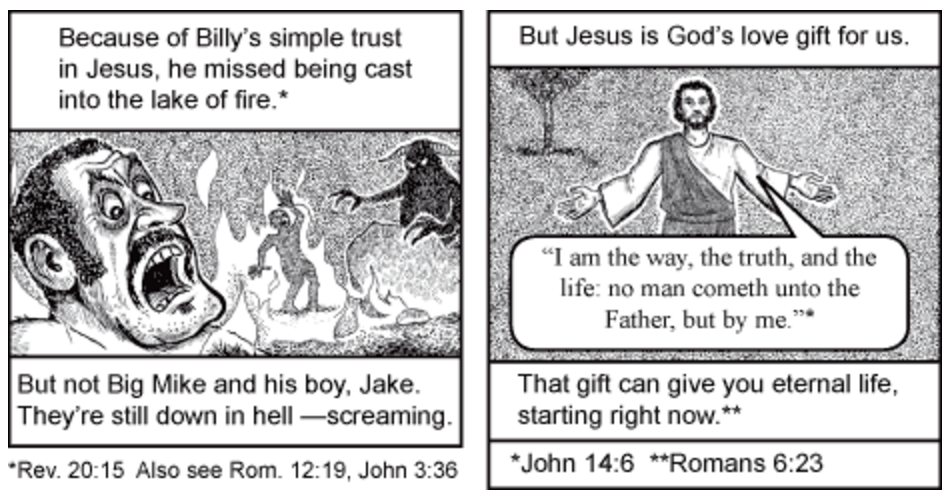 … Chick tracts didn’t just serve the purpose of recruitment. Chick tracts were fear pamphlets. Each one served to create a massive them and a tiny righteous us. As children in our church, we were expected to isolate ourselves from the rest of the world. Obediently, we excused ourselves from school lessons, avoided making friends with sinners and closed our eyes if we passed an ad that might provoke sinful thoughts. These tracts confirmed that our isolation was not just right, but life-saving. What if I should talk to the wrong teacher and end up drinking baby blood at threat of knife point? What if I listen to the wrong music and let demons into my body? What if I forget for the smallest moment that I am a sinner and lose it all?

When people say religion can be a form of psychological abuse, this is what they’re talking about.

To most, the passing of Jack Chick is a cultural hiccup. It’s a chance to laugh at the funny books that tell such ludicrous lies that people wonder if they might be parody.

For me its a reminder of the weird horror movie I grew up in. One where demons were real and torture was promised as a punishment for reading the wrong book or thinking the wrong thought.

How fucked up do you have to be to convince kids that they’re one secular move away from an eternity of torture? Yes, we can mock those tracts all we want. We can call out the anti-Catholicism, racism, science denial, and secularism-is-evil mindset all we want. But there are people for whom these stories were a very real part of their adolescence.

Some of them broke free from that faith, but not all of them did.

Let those tracts serve as a reminder of why we’re so vocal about our atheism. We want to protect people from those agonizing, untrue beliefs.