Texas House Candidate: Don’t Vote for My Opponent Because She’s a “Self-Proclaimed Atheist”

Elizabeth Tarrant is a Democrat running for the Texas House from District 97 against incumbent Republican Craig Goldman. This is a really red District — Goldman won 82% of the votes in 2014, albeit without a Democrat in the race — but he’s taking no chances this time around.

In a letter sent out by his campaign, Goldman asks voters to support him because Tarrant is a “self-proclaimed atheist” who “does not have the values you want to represent you in Austin.” 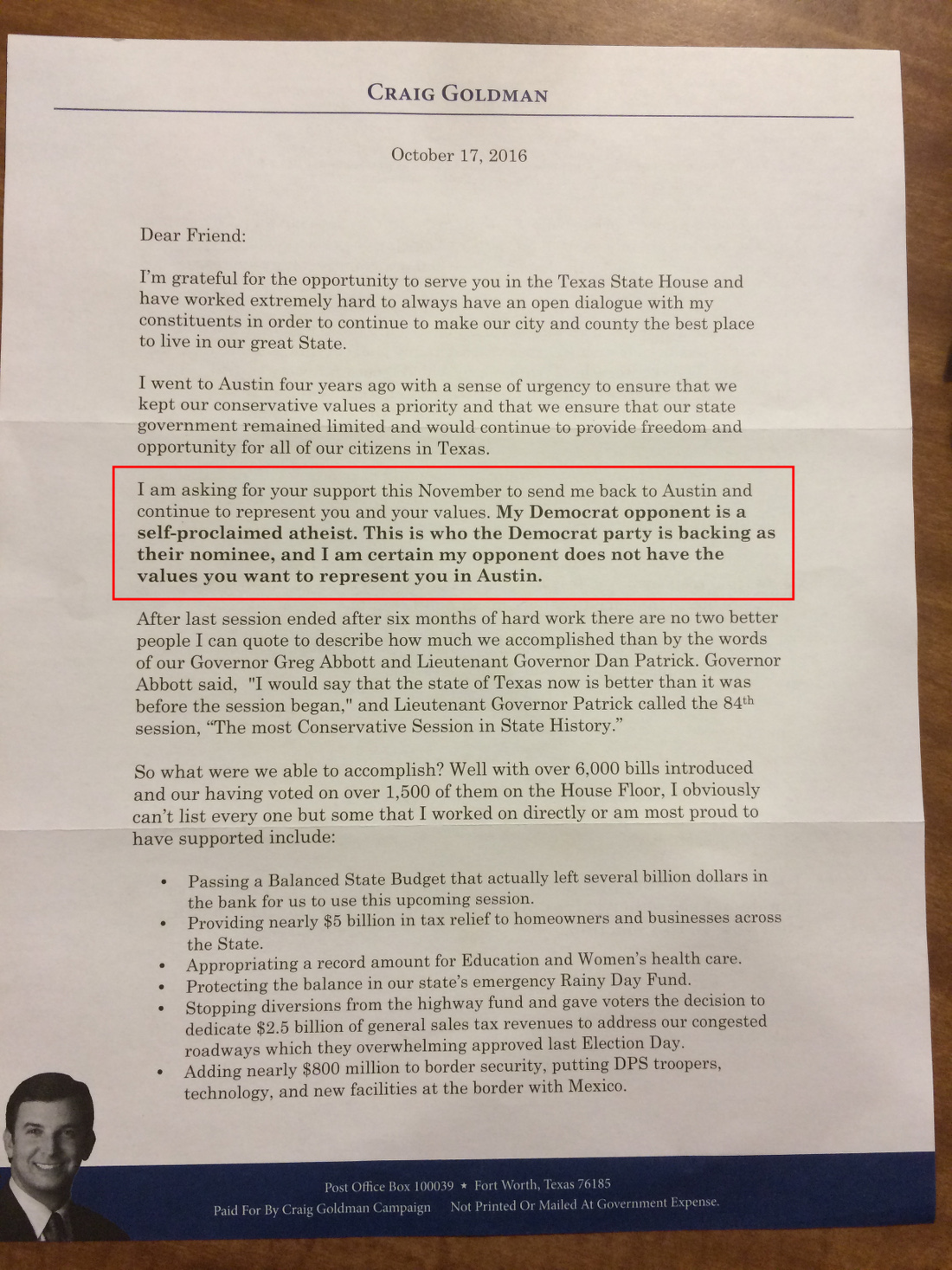 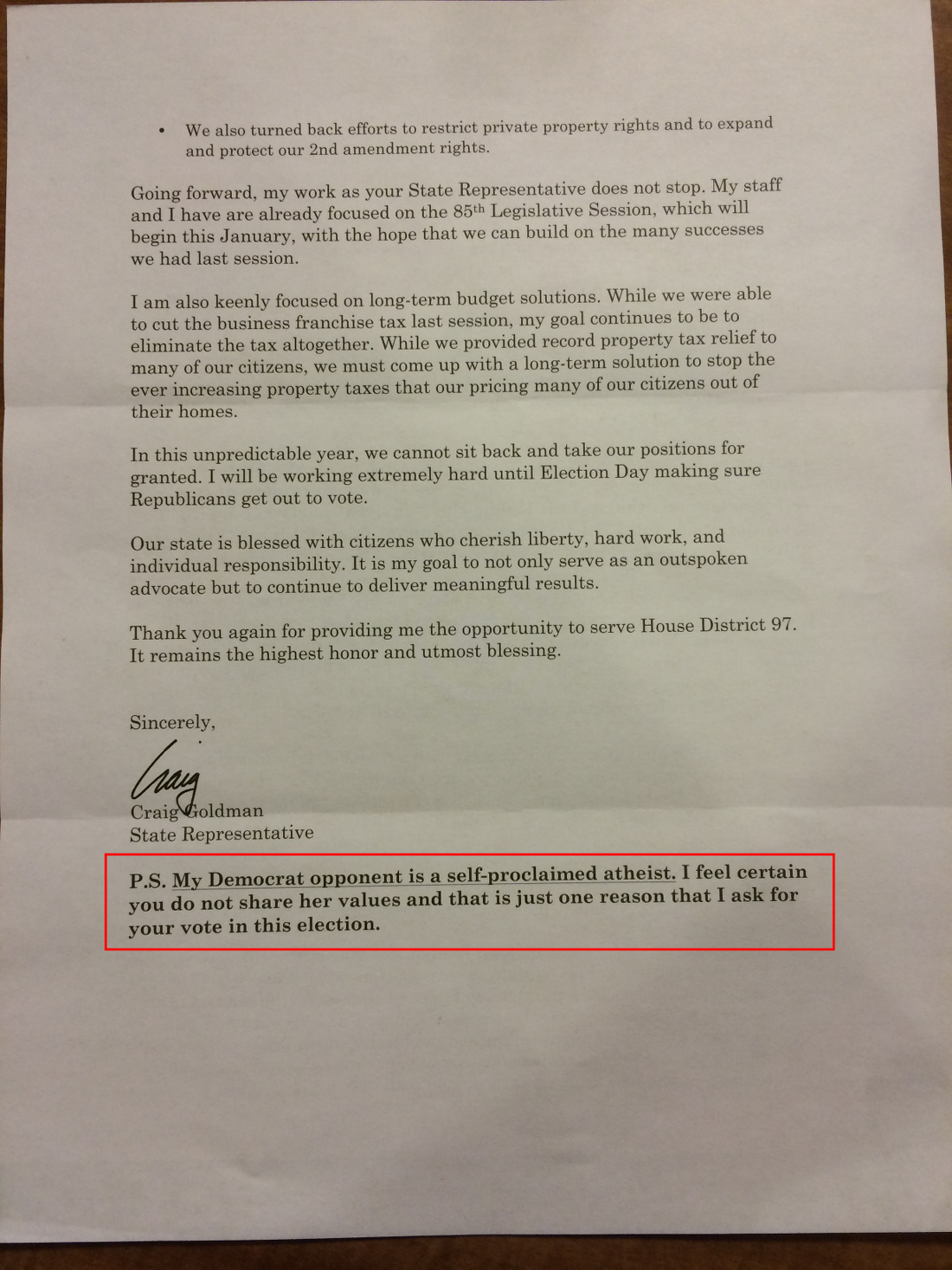 I am asking for your support this November to send me back to Austin and continue to represent you and your values. My Democrat opponent is a self-proclaimed atheist. This is who the Democrat party is backing as their nominee, and I am certain my opponent does not have does the values you want to represent you in Austin.

P.S. My Democrat opponent is a self-proclaimed atheist. I feel certain you do not share her values and that is just one reason that I ask for your vote in this election.

He doesn’t explain what Tarrant’s awful, heathenistic values are, but she supports women’s rights, church/state separation, and religious freedom. Apparently, following the Constitution is antithetical to everything Goldman stands for.

In case you’re wondering, Tarrant is indeed an atheist. She began a Secular Student Alliance group at Tarleton State University when she was a student there and has been active with the Metroplex Atheists. She even protested at a local courthouse when officials put up an “In God We Trust” sign inside and outside the building.

But she hasn’t run for office as an atheist. She hasn’t used her campaign’s website or social media to advocate atheism.

Goldman’s team must have searched her personal social media to discover her beliefs, and they’re now trying to use it against her, hoping that the stigma of being an atheist in Texas is enough to turn voters away from her.

Can you imagine the national uproar if that letter said voters should be wary of her because she’s a “Jew” or “Hindu”? It would be denounced immediately. And that’s the same sort of bigotry Goldman exhibited in this letter.

I spoke with Tarrant earlier today and asked if she knew this letter was coming. She said, “I figured he’d do that. I just didn’t know when… I live in the middle of Texas and it’s very religious down here. I expected it.” She added that she’s not ashamed of her atheism — she’s not going to pretend she’s religious just to get votes — but she’s running to represent everyone in the District, not only the ones who are non-religious.

Her team plans to response in the near future with a more positive letter sent to the same constituents.

For what it’s worth, Tarrant’s internal polling (which I haven’t been able to verify) says she’s neck and neck with Goldman. That would explain why he’s taking such a low road to discredit her. Because when you can’t beat your opponent on the issues, might as well attack her religious views, right?

The election is two weeks away. There’s still time for Goldman to go after her gender or bisexuality. It clearly wouldn’t be beneath him.

If you’d like to donate to Tarrant’s campaign, to show Goldman how unacceptable and reprehensible his words are, you can do so right here.

October 25, 2016 Samantha Bee Condemns Catholic Hospitals for Putting Religious Dogma Above Patient Care
Browse Our Archives
What Are Your Thoughts?leave a comment